By MIKE PERCIACCANTE
July 30, 2008
Sign in to view read count 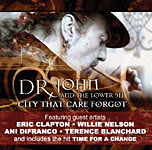 Joined by Eric Clapton, Terrence Simian, Willie Nelson, Ani Difranco, Troy "Trombone Shorty" Andrews and Terence Blanchard, the CD features 13 songs about the stark reality that is post-Katrina New Orleans and the United States circa 2008. As such, the music is angry, dark, and moody while underneath it lies all is that upbeat New Orleans "fonk" sound that epitomizes the Dr. John sound.

In addition to the anger that is displayed on many of the tracks, Dr. John is also making a plea for help to anyone that will listen. He is lamenting his late, great city that will (hopefully) rise again. This is very evident on the title track, which details his sadness and the fact that an area that was once filled with the sounds of laughter and music has been drastically changed. "Time For A Change," with fretwork supplied by Eric Clapton, features the good Doctor getting down and nasty, while taking everyone in his sights to task, regarding their lack of environmental concern and responsibility to the earth. Additionally, the song demands that corporate entities be held to a higher standard.

"You Might Be Surprised" is a '50s-style ballad that begs for people to take action, believe in themselves and stop repeating history. "Black Gold" takes direct aim at the Iraq War and America's dependence upon oil. On "Say Whut?," Dr. John takes an unforgiving look at the crime, tragedy and devastation that fell upon his beloved Nawlins after the hurricane. The song demands that someone be held responsible for what surely could have been avoided.

City That Care Forgot is a political album, but its accessibility is not hindered by its message. By mixing his message with his usual gumbo of rock, pop, R&B, jazz, funk, blues and all things New Orleans, this is Dr. John's best CD in over 15 years.

Keep On Goin'; Time For A Change; Promises, Promises; You Might Be Surprised; Dream Warrior; Black Gold; We Gettin' There; Stripped Away; Say Whut?; My People Need A Second Line: Land Grab; City That Care Forgot; Save Our Wetlands.