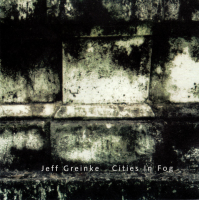 This release sees a remastered version of Jeff's first album on disc one and new material, '95-'97 on disc two. This is dark, brooding, expansive ambience at its droning best. It is an aural diary of inner reflections upon the "everyday sounds and their inherent beauty" quoting Greinke. This is not ethnic, percussive, trance music. This IS THE trance, the soundscape of underwater trains and ether dreams.

Let me diverge on the visionary worlds these pieces elucidate for me. You are alone on the frozen river Styx, the Underworld is refusing your entry. Instead, you are sent eons into Earth's future where the Sun has long ago faded but the atomic hearts of ancient autofacs still belch forth just enough life-giving heat. A solitary, lumbering, landwhale drags itself across a terrain of permafrost. His baleful call echoes across the featureless horizon. Overhead, icedust assails the remains of cloud-cities in an eternal lifeless orbit. The vault of the heavens shouts of your insignificance and limitless vistas of time and space whisper of life's short dance. You dare speak but words are meaningless here. A great darkness has moved beneath you, under the frozen wasteland of a dead sea. A relentless beat, a pummeling begins from deep below the ice. You run, slipping, gasping, towards the landwhale in the distance. The ice behind you buckling, you grab onto the frozen mane of the finned mammoth, pulling yourself up. You survive to sleep and awake along a Nebraska roadside back in the 20th century. The droning of a distant triple-trailer truck approaches lulling you into another dream. You awake reading an Iain M. Banks novel wondering what CD this is. Highly recommended for visionary moods.

Reprinted with the permission of John Collinge and Progression Magazine .