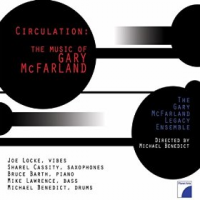 Drummer Michael Benedict, leader of the BOPITUDE and JAZZ VIBES groups, directs a new quintet assembled for a special project that pays tribute to the late Gary McFarland on Circulation: The Music of Gary McFarland. An influential composer, arranger, vibraphonist and vocalist during the 60s, McFarland had a brief career as he met an untimely death at a young age, was a major contributor to orchestral jazz and was instrumental in introducing the jazz idiom to the pop and rock genres. The music of McFarland may not be too familiar to today's jazz audience because many of his compositions and arrangements remain unheard to this day. This homage to the McFarland style is a beginning step to ensuring his legacy lives on.

Benedict chose to reimagine and recreate the music of a man who left this earth much too early, not just as an artistic endeavor but, also from a very personal point of view. Benedict had been married to Gail McFarland-Benedict, McFarland's widow who sadly passed away in 2007. For this album, Benedict assembles a new quintet that includes some old bandmates from his other groups namely, Bruce Barth on the piano and Mike Lawrence on bass. Jazz masters vibraphonist Joe Locke and saxophonist Sharel Cassity, round out the cast of the formidable Gary McFarland Legacy Ensemble.

There are several compositions documented here that are part of McFarland's early days at the Berklee School of Music and the opening "Dragonhead," is one. It features Cassity prominently with Locke and crew providing superb backup with sparkling solo moments from pianist Barth. It's the vibraphonist's turn next on the bluesy ballad-like "Why Are You Blue?" that also captures a brief bass line solo from Lawrence and delicate cymbal accents from the leader. The hard-driving "Sandpiper" is one of the best tracks of the set originally recorded by McFarland for Point of Departure (Impulse, 1963).

A theme McFarland revisited many times during his career, first emerged as the main title of the David Niven/Sharon Tate movie "Eye of the Devil," the beautiful ballad "One I Could Have Loved," features a sublime Cassity on tenor and Locke on the vibes on one of the two ("Summer Day") gorgeous soft spots of the set. Both "Chuggin' and "Bridgehampton" are fine examples of some propulsive bebop and were previously recorded by the Gerry Mulligan Concert Jazz band.

The title track and the finale tune "Last Rites for the Promised Land"—a solo interpretation by Locke originally appearing on McFarland's America the Beautiful (Passport Audio, 1965)—closes the session in appropriate style. A fitting tribute to a man who's music influenced so many, Circulation: The Music of Gary McFarland is, unquestionably, and exceptional recording and only the first salvo of Michael Benedict's Gary McFarland Legacy Project.

Dragonhead; Why Are You Blue?; Sandpiper; One I Could Have Loved; Chuggin'; Bridgehampton Strut; Blue Hodge; Notions; Summer Day; Circulation; Last Rites for the Promised Land.

About The Gary McFarland Legacy Ensemble