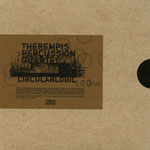 Dave Rempis is best known as the other saxophonist in the Vandermark 5, a ferocious virtuoso improviser who's at home in every style of music you can name. With Circular Logic, one of the most exciting albums of the year, Rempis steps up to lead a free bop band with two rampaging drummers.

The music on Circular Logic consists of two long completely improvised performances, both recorded live. On "1.2," which runs for over half an hour, Rempis plays well on alto, baritone, and tenor saxophones, while on "2.1," he concentrates on baritone. "1.2" cavorts through several spontaneous changes in meter and tempo, while the more cohesive "2.1" builds its considerable momentum in a quick-stepping and very swinging triple meter.

In fact, while most of this program exhibits elements of free music, there's a lot of cooking throughout. With two drummers going at it, the rhythms get very complex, but a swinging pulse is at the heart of everything here. The first piece, for example, starts out in a busy 6/4 tempo and concludes with a segment of very fast 4/4 swing. Rempis carries the weight of melody, and he succeeds admirably at this.

Rempis opens the disc on alto sax, disgorging a repeated quarter note, then expanding it into riffs, melodies, and swinging lines, sometimes punctuated with fast runs or episodes of screaming or other noise elements. His tone is very warm, very full, pretty and pure, just as it is on all his horns, although he also invests his sound with some real bite. His baritone sax is cavernous, much like Harry Carney or the late, little-known Charles Tyler. His tenor has the crisp edge of Chicago hard bop masters such as John Gilmore and Clifford Jordan. He plays explosively on all his horns, building his solos to repeating climaxes. He understands the power of controlled freedom in music, so that this music, even in its wildest moments, retains a sense of order.

The rhythm section also maintains order. Bassist Anton Hatwick has impeccable time and radar ears. He always knows where the beat is. Drummers Frank Rosalt and Tim Daisy send out waves and waves of rhythm. How they interlock in such splendid fashion, in spontaneous music, is one of the many happy mysteries of this very fine CD.

Note: according to Utech Records, this recording was released in an edition of only 125 and has already sold out.