By DAN MCCLENAGHAN
March 24, 2017
Sign in to view read count 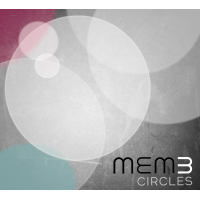 The modernistic piano trio, MEM3, draws influences from the innovative e.s.t. (Esbjorn Svensson Trio) and the Bad Plus, as well as the legendary drummer Peter Erskine's trio recordings. Circles, MEM3's second outing, puts them in the league with those higher profile groups as they craft an understated and unfailingly lovely trio sound enhanced with subtle electronic effects and fluid interplay.

"For ES" (Esbjorn Svensson) is undiluted joy, understated initially, before bursting into a muscular momentum that fades back to delicacy atop a soft, relentless rhythm. "Centrical," the disc's opener, entices with the sublimely soft touch and charm of a delicately interactive trio. "Native Dancer" is a dark piano groove underlain by a feathery rhythmic backdrop. "Circles," the tune, is a buoyant bass groove riding a shimmering piano and a metronomic drum shuffle, enhanced by an (almost) subliminal electro-effects.

If MEM3 comes out of the e.s.t school of the modern piano approach, Circles, their sophomore effort, rises to the top of the class—an enchanting and deceptively complex and straight-through compelling set of sounds.

And the sound should be mentioned. It has a remarkable clarity. It might be possible, just by listening, to count the bristles on drummer Cervini's well-employed brushes, on this set that can sit on the shelve next to the best of the modernistic piano trio outings.