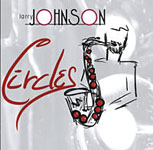 Circles are infinitely symbolic in their geometric design and interpretation—no beginning and no end, directionally ambiguous, enclosing an extended infinite inner dimensional space. In Circles, his first CD as a leader, tenor saxophonist Larry Johnson steps up to deliver a dozen fine selections displaying that he's definitely no musical square. He sounds as if he knows where he's headed musically —and that direction will not be going around endlessly in a never-ending artistic circle.

Kicking off the disc with two well-known rock hits—a sincere and nicely funky cover of Billy Preston's "Will It Go 'Round in Circles," followed by Steely Dan's triple-metered and quasi-modal hit "Do It Again"—Johnson's sound is both inviting and highly energized throughout the session. "Don't You Worry 'Bout a Thing," from the Stevie Wonder songbook, is given the Latin treatment, while the inclusion of Vince Guaraldi's "The Great Pumpkin Waltz" shows a slick producer's touch.

Johnson first exposes his late-night/early-morning soul deeply on Mal Waldron's "Soul Eyes." Subsequently taking excursions into classic tenor land, he take on "Body and Soul," "My One and Only Love," and "Speak Low," demonstrating a more muscular-sounding approach. "Nothing But Blues" has that "Killer Joe" feel and cooks with a fine ensemble, while Wayne Shorter's "Black Nile" flows hot.

The inclusion of trumpet superstar Jim Manley is a plus here, and wherever he appears with horn in hand. Trombonist Jimmy Owens blends beautifully with the group and sparkles on all of his solo forays. Owens also doubles nicely on keyboards, spelling the fine-playing Carolbeth True. The rhythm sections—with multiple personnel alternating—move the group along marvelously in both genres.

Johnson's ability to jump from his rock side to the more jazz-oriented tunes shows both his flexibility and where his strengths lie. He could easily go in either direction, although he seems here more at home in the jazz vein. The landscape allows Johnson to bare his chops and soul much more comprehensively.

The production values are very good across the session; with the absence of liners, the music speaks for itself.

An enjoyable effort by a very talented saxophone artist, Johnson certainly has his pi with Circles.

Will It Go 'Round in Circles; Do It Again; Blue Sky; Soul Eyes; Don't You Worry 'Bout A Thing; Nothing But Blues; Speak Low; My One and Only Love; Body and Soul; The Great Pumpkin Waltz; Warehouse; Black Nile.