By IAN PATTERSON
October 4, 2012
Sign in to view read count 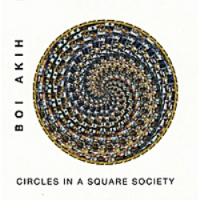 The soul of Boi Akih—a duo, sextet, and all configurations in between— is Monica Akihary's soulful voice and guitarist Niels Brouwer's jazz/world-inflected acoustic guitar. Boi Akih has always experimented; Lagu Lagu (Bromo, 2005)—an exquisite meeting between jazz, blues and Indonesian folk—was sung in the almost extinct Haruku language of Akihary's ancestors. With Indian percussionist Sandip Bhattcharya, Boi Akih roars and sighs like a little Shakti. Innovation and adventure defines—and inspires—Boi Akih, but an album of interpretations of the alternative pop/folk culture music of the '70s—singers Joni Mitchell, David Crosby, Neil Young, Bob Marley and guitarist/singer Jimi Hendrix—is a surprise. However, like the best surprises it's an absolute delight.

There's no denying, though, the beauty of the covers. "Guinnevere" is a slower take than the original, with Akihary's dreamy reverie accompanied by Wierbos' empathetic yet constantly searching trombone, a barely perceptible percussive pulse and guitar of harp-like delicacy. It's a haunting performance and the second notable interpretation of that tune in a short time, following BAAN's mesmerizing instrumental version. Mitchell's "Cold Blue Steel and Sweet Fire" follows a similar path, though Akihary's brings a rootsy blues depth to the melody. It doesn't take a leap of imagination to hear a latter day Mitchell approaching this song from 1972 with similar intimacy.

"Circle 2" is an ambient chill-out that's as odd as it is appealing, featuring a voice reciting seemingly random numbers, like an absurdist's take on bingo. Akihary's wordless vocal and Brouwer's quietly stated electric guitar improvisations—with ghostly percussion as light as angel's hair—work a wicked charm. The vocal/guitar duet on Hendrix's "A Merman I Should Turn to Be" and the quartet's soulful intimacy on "Drifting" succeed in highlighting the poetry in the legendary guitarist's lyrics and the grace in his melodies. The same is true of the vocal/guitar duet of Young's "Old Man," a gorgeous interpretation that quietly states the chemistry fostered between Akihary and Brouwer since 1996.

Brouwer's acoustic solo, "Circle Exercise," is a minor gem built around a melody that evokes "Three Blind Mice," with the same mellifluous appeal—though minus the gory imagery—of that surreal 19th century English musical round. "Circle 4" is a bristling number, with each musician plotting an individual course—though with the same destination in mind—on the high-seas of improvisation. A softly padding, folk-flavored interpretation of Marley's "Redemption Song," peppered with slide guitar, puts a lyrical seal on a splendid recording, one that recognizes the beauty in all music, regardless of genre, epoch or language.