By GLENN ASTARITA
January 9, 2008
Sign in to view read count 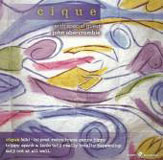 There's no eclectic connotation within this band's moniker, as the website denotes that the name is an anagram for "sick." Sickly wondrous, perhaps, where the core organ trio skirts the fringes of stylizations pursued by Medeski, Martin & Wood amid 1970s-style prog rock and bump/grind executed rhythms. Guitar hero John Abercrombie wields his magic on several tracks within the splendor of this crystalline recorded engagement.

Multitasking keyboardist Jeff Jenkins nicely contrasts Abercrombie's sinuously crafted lines, and generates snappy, organ-combo grooves on many of the trio-based pieces. On "Holland," Jenkins' shady, fuzz-toned Fender Rhodes work augments his piano and synth lines for a composition that sparks notions of entering a shadowy alleyway. And then, with "Sweet b," bassist Bijoux Barbosa steps out with some slick-picking lines to cap off a frothy shuffle vamp.

Chock full of quirky thematic forays and medium-tempo funk/rock motifs, the unit occasionally spurts out a few tricky unison time signatures to augment its scope of attack, while Abercrombie accelerates a spunky jam-band style opus during the bustling "Rock Walk." This little gem of a record looms as one of those unanticipated surprises for 2007. Lots going on under the proverbial hood as themes and sub-grooves tend to sneak up on you and then blossom into full-fledged sonic assaults.