By GLENN ASTARITA
February 23, 2019
Sign in to view read count 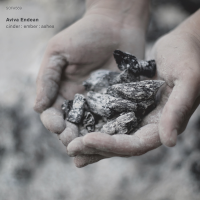 Aviva Endean's debut album for the Norwegian label SOFA is heady and gleams with interesting abstracts. In addition to her improvisational acumen, she is a shaper of sound. Endean toggles between various clarinet types on each track. With asynchronous minimalist parts and microtonal aspects, she also executes darkly weaving passages, iterated with an alien dichotomy. This outing should also whet the appetite of music scholars and avant-garde adventure seekers: it is not "Sunday afternoon music" by any stretch.

On "apparition: above," Endean disseminates howling and edgy phrases, shadowed with animalistic groans and subtle effects, rendered with an undulating flow and supernatural undertones. The clarinetist employs extended techniques but doesn't load up on honking and squeaking. Some of these works impart a sense of loneliness, as if she was in a dark and isolated chamber, although she can sound aggressive and quite comfortable creating ambient/ethereal etudes.

Endean uses a pocket amplifier for an ostinato on "vapour: between," presumably with circular breathing methods, yet she discombobulates her attack into a frenzied outbreak along with an instrument that sounds like an old Casio toy keyboard (or by using the amp in some other unique fashion). "distant song: afar" is tinted by her voice, processed whistles, and bizarre narratives. Other tracks continue to emphasize her expansive imagination via fleeting and drifting lines, alternating with breathy intonation, serrated voicings in the lower register, and pitch variations.

At times the artist's warped storylines and grungy soundscapes are akin to a mechanical breakdown. There is a lot to digest on this presentation, which moves along at an amenable pace and isn't bogged down by hypersonic solo sprees or angst-ridden choruses. Endean's radical thought processes and alternative deliberations are basically unclassifiable—which, unto itself, is a good thing.

burst in black: under; apparition: above; vapour: between; distant song: afar; smoulder: beneath; undulations: behind; ashes for viv: before; cinder: ember: ashes.