By KURT GOTTSCHALK
August 14, 2006
Sign in to view read count 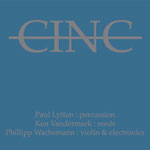 Chicago saxophonist Ken Vandermark is about as well known as a jazz fan as he is a jazz musician. With a breakneck release schedule (two discs is a slow year for him), he has found time to compose and lead his own bands while paying respect to his elders: tribute albums to Sonny Rollins, Rahsaan Roland Kirk and Joe Harriot, a band organized around Peter Brötzmann, and bonus discs filled with live versions of "jazz classics that accompanied some of his quintet releases.

But he's a fiery blower, and one area he's spent less time exploring is the particularly British quietude. His English Suites with percussionist Paul Lytton was an admirable attempt, but this new trio disc with Lytton and violinist Philipp Wachsmann finds him squarely in the middle of territory that has been occupied by the likes of Evan Parker, Barry Guy and John Edwards. The trio is touring and has laid down five tracks (recorded at concerts in France and Slovenia in 2004) for a limited edition release initially only available at performances.

While it's a bit of a departure for Vandermark, he easily finds his place amid two innovative improvisers each some twenty years his senior. Lytton and Wachsmann have both played in the London Jazz Composers' Orchestra, the King Ubü Orchestrü and Evan Parker's Electro-Acoustic Ensemble. They are proficient in English extended improv of a school perhaps more fluid but no more idiomatic than Derek Bailey's playing. Vandermark is anything but bashful in his projects, and this would seem to be another sink-or-swim proposition for him, which as usual he pulls off swimmingly.

The disc begins in quiet abstraction with the players circling each other, not quite soloing but shifting to and from the forefront. By the midpoint, however, Vandermark is pushing through, blowing hard lines with Lytton keeping pace on a controlled snare. But the one to listen to here is Wachsmann. Against the brittle horn and drums, he tends to fall toward the back much of the time. His electronic washes and thoughtful violin lines push this well beyond an English Suites sequel.

On record, the trio tends to blur: reeds and strings rub against Lytton's seemingly almost accidental drumming until he switches to sheets of metal and the triangle again shifts. But at Tonic on June 12, it was easier to discern them as three pieces (it's the sort of band where visuals help). Even on baritone sax, Vandermark found a place in the upper registers of his bandmates. But whether heard as a triad or something more singular, Cinc builds sparse yet protean and quite nice sound spaces.

If there's one criticism to be made about Vandermark, it's that his tribute projects are often efforts of respect that don't add much to the originals. But when he approaches a style rather than specific compositions—as with the Peter Brötzmann Chicago Tentet—he throws himself in headlong. Cinc is, with hope, just a preview of another Vandermark dedication.