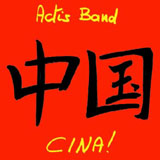 Sax and clarinetist Carlo Actis Dato has shown an uncanny ability to keep his ear to the ground and pick up the music of the several countries to which he has traveled. His music is happy, gentle, edgy and energetic; evocative of the land that inspired them. He also has the knack for writing memorable melodies from which he and his band spring forward with a bag of engaging ideas.

The band members have been together for a long time and the empathy and ease between them is obvious. They kick right off with a chant that launches "Fela. The composition, a celebration of the Nigerian musician and his indomitable spirit, churns the heat with jazz, funk and the inescapable African rhythmic core.

The Afrobeat is irresistible, but it is soon sent asunder as Actis Dato unfurls several loops on the baritone saxophone. He is the centrifugal force as the rest of the band swirls around him nestling in the melody. The character of the composition changes, a martial air harkening to the revolutionary spirit of Kuti. The reverb and feedback of Karsten Lipp's guitar and the rooting of Federico Marchesano's electric bass foist heavy metal, the turbulence a reminder of the challenges Kuti faced. At the end of it all, this is eloquent testimony to an important and remarkable musician and human being.

It's ballad time as the Actis Band sends out an "SOS From Djakarta. The melody grabs quick attention, unveiled by Actis Dato on tenor saxophone and Rossi on alto. ActisDato is joined by Lipp as he opens the doors and steps out to explore, at once breathy and assertive. The twin streams evolve into a seamless whole and sit nicely as the avenue into which the rest of the band sets up their inventions.

And then there's "Mumbai the main commercial center of India and a bustling city that opens its heart to visitors. The composition dips into folk norms given a warm resonance by Marchesano's arco. He raises the intensity, dipping deeper into the tonality, arching his lines before skewering them. But there is that parallel vein where the melody lilts and lifts the spirits and where Bruna etches the organic beat with a percussive dance.