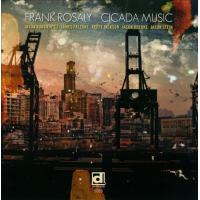 What to expect, when you are expecting a drummer-led recording? Certainly, the mix should include the drums more upfront, or perhaps longer solos? If so, then you might be taken aback by Frank Rosaly's first official release as a band leader. The cornerstone of many innovative bands like Jason Stein Quartet, Valentine Trio, Rolldown, Scorch Trio, Flatlands Collective, Chicago Lucern Exchange, Fast Citizens and too many more to mention, wrote the very un-drummer-like Cicada Music as an atmospheric tome poem.

Rosaly mixes five shortish solo pieces with five compositions for his woody three clarinet, vibraphone, and bass sextet. The effect is a warm organic sound that is full of rich overtones and plenty of squanky passages. Engaging vibraphonist Jason Adasiewicz (a former drummer) into the band as a metallic foil to the woodwinds balances Rosaly's cymbal play on "Tragically Positive" a lurching Thelonious Monk-like composition that stumbles drunkenly against the horn players, James Falzone, Keefe Jackson, and Jason Stein. Rosaly orchestrates honking passages by bass clarinets, as fodder for his brief solo on the exuberant dark bebop track "Wet Feet Splashing." He prefers his pulse to be integrated in the group, and not opposed to it. His brush and cymbal work on "Driven" sets off bassist Jason Roebke and Jason Adasiewicz' explorations. The drummer prefers a rattling sound (the cicadas?) as the metal vibes answer the woodwinds.

Rosaly's music grows and grows throughout this disc. His five solo pieces compliment the sextet work by adding more bug music. The buzzing of electronics surrounds his percussive touches on "The Dark" and "Bedbugs," and ringing bells accent "Adrian." Like his solo recording Millwork (Molk Records, 2009) he can bring seemingly disparate sounds together to create a new assemblage. His longest solo piece "Credits" gathers fragments of piano, cymbal work, drums, and bowed strings into a meditative passage. In the other musician-led bands he works in, Rosaly is an engine. Here he is a sheppard of sound.