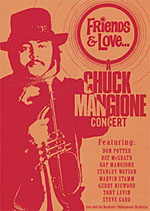 In the decade 1970-80 composer/arranger/trumpeter Chuck Mangione was hotter than a four-alarm fire, drawing large audiences to his concerts and producing two Grammy Award-winning albums that combined elements of Jazz, pop, New Age and even classical music in performances with the Rochester Philharmonic Orchestra and other ensembles. One of those concerts, Friends and Love, taped in 1970 at the Eastman Theatre and telecast on WXXI in Rochester, has now been released on DVD.

The engaging performance opens with one of Mangione's signature themes, "Hill Where the Lord Hides, featuring longtime colleague Gerry Niewood on soprano saxophone and Mangione on flugelhorn. A downside is that some of Mangione's other memorable songs, such as "Chase the Clouds Away, "Feels So Good, "Children of Sanchez and "Land of Make Believe aren't included, as they had yet to be written. A youthful Marvin Stamm is showcased on trumpet on "The Feel of a Vision, while guitarist Stanley Watson plays unaccompanied on "Songs from the Valley of the Nightingale. Mangione's brother, Gap, plays funky electric piano on "In the Beginning, preceding admirable solos by Niewood on flute and alto sax.

It is here that the packaging becomes a bit confusing, as one could only deduce (if he or she didn't already know) that the last half-dozen selections, listed separately on the cover, actually comprise a medley, starting with "Friends and Love and including "Someone Take Me Home, "Get Yourself on a Farm Elinda, "She's Gone, "Joropo Piropo and a reprise of the main theme. The soloists include Watson, guitarist/vocalist Bat McGrath and (tenor saxophonist?) Don Potter (I'm guessing here, as solo instruments aren't identified, nor are complete personnel listed).

Mangione, a fine player who'd paid his dues with Art Blakey's Jazz Messengers, among others, doesn't play much here, soloing only on "Hill. But this date is more about his compositional skills, which certainly make the concert worthwhile. The performance itself lasts for nearly an hour, and special features on the DVD include a biography, discography, photo gallery, lyrics, and links to web sites. Throughout the concert, the camera focus is where it should be, on the musicians themselves. The audience is heard but not seen. The music is invariably pleasing, the RPO splendid in its backup role, while drummer Steve Gadd helps supply the necessary rhythmic power. The disc's a treat for those who remember fondly when Mangione was at his zenith, as they can now see as well as hear some of what gave rise to his widespread popularity.