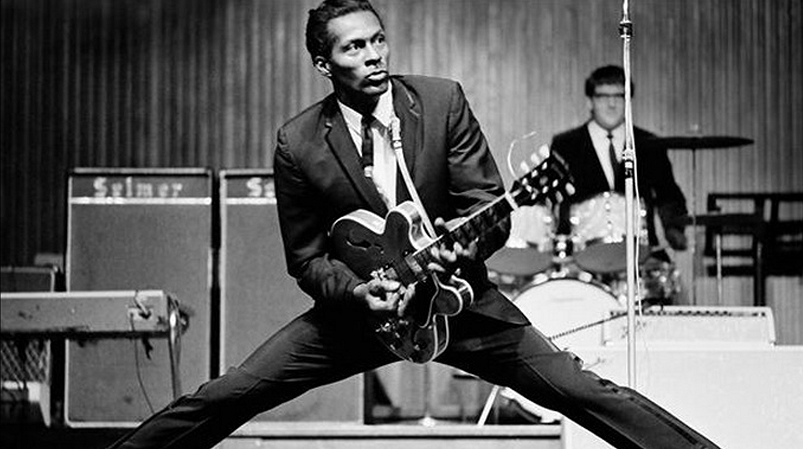 By C. MICHAEL BAILEY
March 21, 2017
Sign in to view read count
In the same spirit of the evolutionary question, "What comes after Music," I ask how does one simply acknowledge, if not pay homage, to what is beyond Greatness? The Saturday, March 18th New York Times did not do bad with:

"While Elvis Presley was rock's first pop star and teenage heartthrob, Mr. Berry was its master theorist and conceptual genius, the songwriter who understood what the kids wanted before they knew themselves. With songs like "Johnny B. Goode" and "Roll Over Beethoven," he gave his listeners more than they knew they were getting from jukebox entertainment."

..."he gave his listeners more than they knew they were getting from jukebox entertainment." The Brown-eyed Handsome man, Chuck Berry, has been assumed into R&R Heaven, creating a new Holy Day of Obligation for every music lover. He leaves at a time when his initial messages of high-school good times, boys, girls, parties, and all the things that make being humans, human is needed more badly than ever. Rock & Roll's Apostle Paul has finally come home.

Berry was egalitarian, appealing to a white audience of teenagers and young adults having the initial stirrings of epiphany that Jim Crow America is not America but something far more malignant. A Malignancy that stubbornly remains today, untreatable, and presently enjoying a new era of popularity. March 31, 1958, Chuck Berry released: "Johnny B. Goode," mere months before this author showed up himself. Fourteen years later, having heard Johnny Winter's searing performance of the same at the Fillmore East, I was teaching myself to play this song, just as millions of other pimply-faced white boys did. Never mastered that essential introduction, but I played the song a trillions times.

It is the brutal existential fact that we will all die. While I am quite comfortable with my own, I am not so comfortable with the deaths of others. When a talent and personality like Chuck Berry passes on, a temporal and cultural vacuum is created that is in danger of being filled with something inferior, often vastly so.