Having been impressed with Chuck Anderson's new CD, Freefall, the current reviewer recently interviewed this master guitarist in process of renewing his playing career after a period in the wings due to a couple of untoward life events (theft of his prized guitar and previously undiagnosed severe sleep apnea). Eager to catch Anderson's trio in live performance, he hopped over to the New Hope Winery to hear them perform at a delightful semi-rural location near the banks of the Delaware river north of Philadelphia. He wasn't disappointed—Anderson and his group delivered a lively, swinging, and powerful set, with ample opportunity for the guitarist to show his remarkable technique and interpretive skill with even more room to improvise freely than a recording allows.

In the first set, the group combined familiar standards with Anderson originals, and as they warmed up, the intensity and swing of their playing developed in the direction of more and more improvisational freedom typical of the best grooving club dates. Anderson started out with a controlled rendition of Bobby Timmons' classic "Moanin,'" and segued into the familiar ballad, "There Will Never Be Another You." With his original, "In a Misty Glow," from Freefall, Anderson began to come forth with his fantastic guitar work, shifting timbres and sonorities, executing Paganini-like swift fingering, and resonating with the history of the jazz guitar, with shades of Django Reinhardt, Les Paul, Wes Montgomery, and Pat Martino floating around in a bluesy mix. Three more originals, "Bojon," "Enchanted Garden," and "Double Dippin'" gave Anderson additional opportunities to show his wares, and 5-string bass guitarist, Eric Schneider came on with solos whose virtuosity complemented Anderson well and took off from ideas developed by the latter. The trio plays in a tightly coordinated formation that at times sounds virtually like a single instrument. 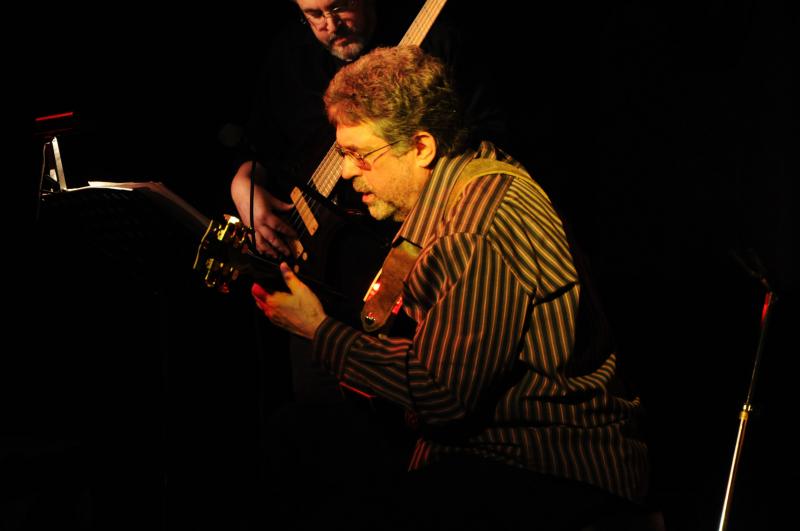 The energy level picked up with "St. Thomas" (a children's calypso song from the Virgin Islands that Sonny Rollins developed into one of his signature tunes) and the standard "The End of a Love Affair." Anderson's version of Wes Montgomery's "Full House" served as a tribute to the great guitarist, who briefly mentored Anderson in the latter's youth. Strikingly different from Martino's dedicated version on Remember, Anderson made little attempt to emulate Montgomery, rather sticking with his own unique style of carefully placed motifs that he developed in different registers and sound qualities, from staccato picking to soft, lyrical phrasings.

The set developed further intensity with Anderson's own "Mystique," "Flight," and "Diablo's Dream," with drummer Ed Ricks coming in with a couple of rocking solos and Anderson providing a whopping Jimmy Bruno-like coda to "Diablo's Dream," a crowd-pleasing ending to a set generally characterized more by the group's independent spirit and discipline than by any attempt to satisfy the masses.

There are two traits that make the Chuck Anderson Trio worth hearing at any opportunity. One is their sense of ensemble and coordination. The other is Anderson's guitar magic, informed by his superb technical mastery combined with imaginative, resilient improvisations. Hearing this group live or on recording will satisfy both the serious aficionado and the broad spectrum of listeners who appreciate jazz of high quality.

The New Hope Winery is located just west of the hip towns of New Hope, PA and Lambertville, NJ. Their concert barn has good acoustics, a sound stage easily audible and visible from all angles, and linen-covered table settings, all of which combine to provide an excellent venue for jazz and other musical events. Their friendly waitstaff serve wine and soft drinks, and during the break, the audience and performers mingle and socialize in a way that is uncommon in urban clubs where folks tend to stick to themselves. With ample parking and ease of access, it can't be beat as a venue to fully enjoy the musical experience.