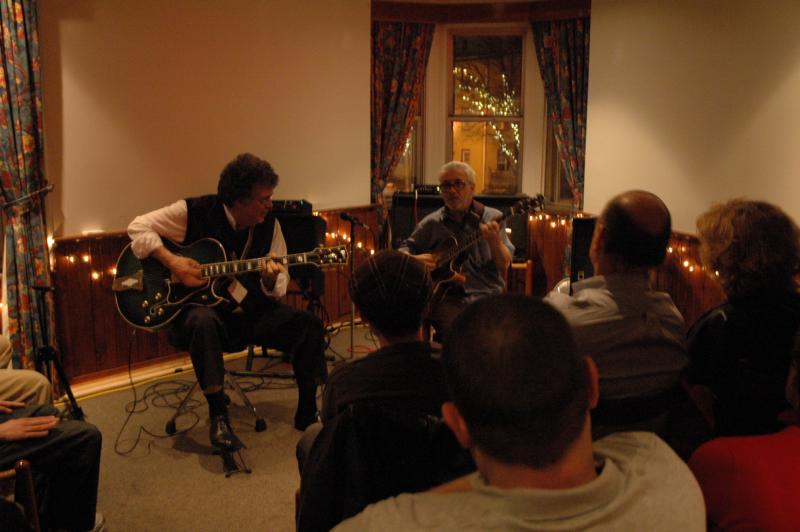 When two self-propelled master guitarists like Chuck Anderson and Jimmy Bruno get together, it's a certainty that sparks are going to fly, but not necessarily in what direction. How would these two individualistic players combine forces—and why?

Anderson and Bruno both came out of the same hotbed of Philly jazz in the 1960s, and swapped potentially lucrative careers as staff musicians to play in formats they loved. Each went through periods of relative inactivity due to medical issues—Anderson with a long bout of undiagnosed sleep apnea that left him depressed and lacking energy, and Bruno with carpal tunnel syndrome—but both recovered well, thanks to excellent medical care, and are back, true to form. Despite their unique styles, they have a great deal in common. Around a year ago, Anderson approached Bruno about a collaboration that would soon include a CD, Images, currently in progress.

Wanting to first show their wares in a laidback venue, the duo gave its first live performances on January 14th and 15th, 2011, in Philly's Chestnut Hill district at Roller's Flying Fish, a hip restaurant with a newly evolving jazz club on the second floor that has already featured the legendary pianist Mose Allison. With shows arranged and hosted by guitarist Jim Dragoni, Roller's was a natural place to gather some jazz and guitar fans together for a listen to this new duet format.

The upstairs space consists of a room that could be someone's den or living room, with good acoustics, a cash bar, and folding chairs arranged to seat about fifty people. It was packed with Bruno and Anderson fans, and eclectic jazz lovers. The two guitarists occupied a comfortable staging area, and their amplifiers delivered excellent sound throughout. Anderson emceed, summarizing the basis of their collaboration and offering well-deserved encomiums for Bruno.

The set consisted mostly of jazz standards, performed in the 1960s-era style of swinging hard bop which Bruno has taken to its outer limits of speed, technique, and expression. Both guitarists were lyrical when they had to be, at other times taking Paganini-like fast runs that were almost heart-stopping. Their sounds differed, with Anderson's sharp execution and Bruno's effortless flow, yet they blended effectively, and with the "closed-eye" test it was almost impossible to tell them apart. They co-improvised beautifully, at times achieving stunning turns of phrase that were synchronized in the mind-boggling way that only such virtuoso musicians can achieve.

"Out of Nowhere" was delivered in straight-ahead up-tempo fashion, while, by contrast, the duo's version of "Lover Man" began with a slow, rubato statement of the theme that picked up to a rhythmic waltz tempo with a Latin lilt. The Les Paul influence was felt on the reflective "When Sonny Gets Blue," while "There Will Never Be Another You" featured stunning pyrotechnics, with each guitarist comping for the other's solos. A highlight was Bruno's solo version of Clifford Brown's "Joy Spring," done in diverse variations that fully captured the exhilarating flavor of the song, while also serving to illustrate what miracles Bruno can accomplish on his instrument.

The set concluded with three originals, beginning with the Anderson-Bruno collaboration "Fantasy," to be recorded in an ensemble format on the upcoming (and long in preparation) CD. The tune and the CD are based on Anderson's specialty of composing tunes that cross genre boundaries, but generally stay within traditional harmonies and textures, embodying his concept of electric guitar as a "classical" instrument. Anderson then performed a lyrical rendition of his original, "Song for Corinne." The closing number, "Jimmy's Blues," could have been one of those tunes written on the spot to take the set out in a lively, foot-stomping way. The audience was obviously gratified and thrilled to hear these two outlandishly superb guitarists in an intimate neighborhood setting.