By NORMAN WEINSTEIN
August 22, 2005
Sign in to view read count 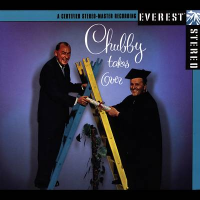 This respectable (though not exactly essential) big band session was organized by Chubby Jackson, a very versatile bassist who paid his dues with various editions of the Woody Herman big band from the '40s on. This album gathered a number of former Woody Herman alumni, essentially many of the same players who appeared on The Herd Rides Again.

Everyone plays precisely and powerfully, but the arrangements seem corny and dated for the most part. If not for the pleasures of hearing Bob Brookmeyer and Al Cohn solo, and they have been featured in more apt showcases than this blockbuster "Let's bring back the big bands and teach rock and roll-adoring kids real music" mish mosh, I would just as soon listen to second-rate Duke or Basie of the same vintage (1958).

As with other remastering jobs on the resurrected Everest label, the horns sound brittle and bright enough to knock your fillings out. Nat Hentoff's liner notes showcase Chubby (think about the fact that this is a musical contemporary of Chubby Checker) Jackson claiming that his music may help kids kick the rock and roll habit. Hentoff also makes much ado about nada by hyping Don Lamond's drum solo on "Loch Lamond," which sounds to me like a cubist sound collage crafted by splicing a number of Gene Krupa's worst solos into a loop.

In addition to the pleasures of the Brookmeyer and Cohn solos, it should be noted that Sam Most, now an obscure flautist, plays quite handsomely. Too bad that Sam Most LPs were rarely transferred to CD. These musicians make Chubby Takes Over a decent listen—as long as you skip the blandest take on "When the Saints Go Marching In" since Lawrence Welk discovered how to do a secular version.

Loch Lamond; Blowin' Up A Storm; A Ballad for Jai; When the Saints Go Marching In; Oh Look at Me Now; Mt. Everest; Yes Indeed, It's Delovely; Cover the Earth With Your Loveliness, Alexander's Ragtime Band; Woodshed; Hail, Hail, The Herd's All Here.