By BRUCE LINDSAY
November 27, 2012
Sign in to view read count 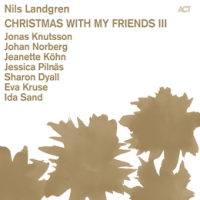 The test of a great Christmas album is simple: will it sound good in August? Christmas With My Friends III should ace that particular test. Even those who derive most festive fun from repeatedly grunting "Bah, Humbug" at passing kindergarten children will be drawn into the spell of this music. Beautifully performed by some of the European jazz scene's finest singers and musicians, the gentle grace of the music comes to the fore and serves as a reminder of Christmas' spiritual quality.

This is the third Christmas album from prolific Swedish trombonist Nils Landgren, and features the same lineup of musical friends as Christmas With My Friends II (ACT, 2008). Recorded at two December 2011 concerts in Storkyrkan, Stockholm's largest church, Christmas With My Friends III boasts exceptional sound, thanks to engineer Lars Nilsson. This audio quality ensures that every nuance comes across clearly, transmitting the atmosphere of the live performances from those cold December nights.

The song list includes traditional songs and carols ("Dagen är Kommen," "Away In A Manger"), songs from the classical canon (Jean Sibelius and Zachris Topelius' "Giv Mig ej Glans," Peter Warnock's "Bethlehem Down") and popular greats such as Stevie Wonder's "Someday At Christmas."

The performances are, without exception, exquisite and the highlights are many. On the traditional gospel song "Somebody Talkin,'" [em] bassist Eva Kruse—usually holding down the rhythm with perfectly judged, understated, playing—sets up a tough, funky, groove over which Sharon Dyall's bluesy vocal soars. The a cappella "Bethlehem Down," sung by the entire ensemble, is delightful, as is the pretty duet between Landgren and guitarist Johan Norberg on their original, "Christmas Is Here."

Two songs seem, at first, to be a little at odds with the Christmas spirit. With its references to no possessions, no Heaven and no religion, John Lennon's "Imagine" pretty much takes care of the religious and commercial approaches to Christmas. Joni Mitchell's "River" may be set during the festive season, but the protagonist seems to want to get away from it as fast as she can, hoping for a river "I could skate away on." However, Landgren's fragile, sincere vocal and Norberg's delicate acoustic guitar combine so beautifully on "Imagine" that it seems perfectly in place here. Ida Sand's heartfelt performance of "River," with its brief but lovely instrumental interpolations from trombonist Landgren and soprano saxophonist Jonas Knutsson , emphasizes the tension between the singer's need to escape and her desire to remain. Not in the spirit of celebration, but a performance of such emotional power that, once again, it fully deserves to be here.

The album's sleeve design is a striking mix of gold and white, in keeping with the ACT Music house style, yet is also evocative of the Christmas season. The performances are golden too: Christmas With My Friends III is sparkling, shining and eternally beautiful.