By JIM SANTELLA
October 4, 2004
Sign in to view read count 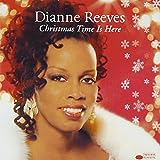 Dianne Reeves puts her personal touch on each of these Christmas carols. Nothing remains ordinary. Each arrangement lets her flow with the freedom that she has always enjoyed in her performances.

Reeves' voice makes each of these traditional pieces float with heartfelt joy. "Chestnuts roasting on an open fire," she sings. The scene comes to life as natural as any other day of the season. Peace settles in gracefully.

"Santa Claus is on his way / loads of joy on his sleigh / this time of the year / when Christmas is near," go the touching lyrics to the album's title track. Vince Guaraldi wrote that. It's one that we'll never forget. He provided us with a major piece of our contemporary holiday tradition. And Dianne Reeves now enters that tradition, as she releases her debut holiday album. What a joy.

But, it's the unique manner in which Reeves interprets her music that makes this highly recommended jazz album so appealing. She contrasts slow and moody portions with energetic episodes, and she clears the air with vocal emphasis. Every time she explores wordless vocals, the songs jump right off the paper. She makes them her own. Hers is a world sensibility. Through her Christmas album, Reeves is able to capture a universal spirit and open it up for all to enjoy.

Little Drummer Boy; Carol Of The Bells; Christmas Time Is Here; This Time Of Year; Christmas Waltz; I'll Be Home For Christmas; Christ Child's Lullaby; A Child Is Born; The Christmas Song; Let It Snow; Have Yourself A Merry Little Christmas