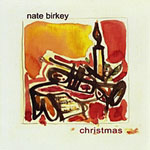 This may be the most laid back Christmas album ever. The more typical holiday records bring to mind sleigh-bells, snowmen, parties, families, caroling, mistletoe, chestnuts on an open fire, and fond memories of past holidays. What comes to mind in connection with Nate Birkey: Christmas are dry martinis, The New Yorker magazine, twilights by the ocean, and being half-asleep as embers glow in the fireplace. Even though the songs are mostly regulars for Christmas and New Years, the style provides a pleasant contrast to the standard holiday fare.

The inspiration for the album, as printed on the inner liner notes, is a poem by Henry Wadsworth Longfellow. It contrasts the sounds of Christmas Bells with the cannon shots of the Civil War, acknowledging the hard realities of conflict while asserting the enduring power of peace. The poem and the CD are both certainly appropriate for the difficult times in which we live.

Nate Birkey combines jazz trumpet/flugelhorn and vocals in the laconic manner of Chet Baker, but without Baker's existential dread. By contrast, he mixes the blue notes with gentle kindness, to provide a sound that is comforting yet questioning of some cherished expectations, such as in this instance, that Christmas is a hyperactive celebratory time. After all, the One whose birth we celebrate was, in the words of Handel's Messiah "a man of sorrow and acquainted with grief," and it is after all winter, when the leaves are gone from the trees and the earth is frozen over with snow.

Birkey's "Silent Night" bears a genuine breath of silence, and "What Are You Doing New Year's Eve?" reflects the shyness of a young man tentatively trying to date a woman he has put on a pedestal. "I'll Be Home for Christmas" breaks the tender heart, while "Hanukkah, Oh Hanukkah" is the sleekest hora ever recorded. Birkey has a Mennonite background, and there is something of their quiet humility in every note on this album. It is touching, as it is contemplative, with just a splash of romance and nostalgia.

Birkey has a way of gathering together a small group of fine musicians, real artisans of their craft, to join him on his CDs such as Almost Home (House Ink Records, 2008) and this one is no exception. The accompaniment is impeccable, with pianists Jim Ridl and Steve Rudolph joined by Tony Marino on bass and Marko Marcinko on drums. Guitarist Vic Juris makes an appearance on "I'll Be Home for Christmas," and when combined with Birkey's sophisticated horn improvisations, the quality of the music itself is quietly stunning. While Birkey's music is generally understated, it always has a way of getting inside and impressing with its sincerity and finely-honed expressiveness. This album is no exception.

Silent Night; O Tannenbaum; Have Yourself a Merry Little Christmas; We Three Kings; Christmas Time is Here; What Are You Doing New Year