By MARK SABBATINI
December 3, 2006
Sign in to view read count
Those spending $600 and dodging gunfire to get a glitch-filled PlayStation 3 probably need all the free holiday cheer they can get.

The repeating loop of music on the store's overhead speakers is more likely to make them postal than passive. But the Web offers enough free albums that are exceptional, unique and utterly bizarre (like a rare "Star Wars" holiday album supposedly selling for $130 on eBay) to occupy the ears for many Decembers to come.

One site alone, Bongobells, offers about 50 mostly out-of-circulation albums, including the "Star Wars" disc and nearly all those in the mini-reviews below. Downloading them here and at some other sites is a minor pain (more below), but others provide decent starter collections almost hassle-free. Among them is Jeffco Christmas Downloads, where the other albums reviewed below can be found.

Many of the albums are discontinued, colossal commercial failures and other projects doomed to obscurity before digital capturing allowed them to be elevated to cult-like status. Generally the album's title and lead performer(s) are about all the information available without exhaustive research, but the sites provide enough description for listeners to know what they're getting before committing bandwidth to them. All of the songs are in unprotected MP3 format, but many are also likely in a legal "grey" area at best. But since eBay seems to be about the only way to get the actual CDs, you probably aren't starving anybody out of their Christmas dinner money.

The annoyance at Bongobells and some sites is sitting through a minute-long nag screen before downloading the album, then waiting about an hour before being allowed to access the next one. It costs about $14 for a month of unlimited instant downloads, which really isn't a bad one-time deal. More favorably, each album—paid or free—comes as a complete ZIP file, freeing listeners from having to download them a song at a time.

Keep in mind, this is only a glimpse of two sites and not necessarily the best they have (the double-CD Nomad Christmas being one of several world music albums at Bongobells that seem highly worthwhile based on a quick audition).

Beyond that, I have hundreds of free holiday albums and similar-size collections from other sites around the world. Recent places I've visited for international files include a compilation of various performers at mamalisa.com and two large collections of sacred and choral music from the Vatican. A search for "Christmas" at the Internet Archive will turn up hundreds of concerts and public domain albums. Songramp has a huge database of musicians offering jazz and other holiday works; some offer one song, others several.

Finding more is ridiculously easy with a Google search for "Christmas," "MP3," "free" and "jazz"—assuming one wants to limit results to that genre. For many religious organizations, performing arts groups and others it's a goodwill/promotional offering, so freebies are more available than almost any other format. Also, don't limit the search to Christmas—some of my most frequently played December albums celebrate Kwanzaa and there's no shortage of cool Klezmer getting more than its usual share of play this time of year. 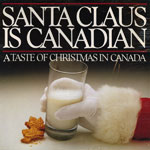 Canada, being the first country to extend its border to the North Pole, ought to know its Christmas carols. The fact U.S. retailers wouldn't touch this 1981 album shouldn't deter listeners from what's really a pleasant multi-artist project.

The country simply is ill-suited for the aggressiveness of today's world—thanks to global warming their claim to the Pole is being challenged by a bunch of nations wanting shipping routes and oil drilling in the thawing ice. When a plane crashed there, the best the Canadians could do was slap a ticket on the pilot for littering.

So the Hallmark sweetness of this 13-song collection is a lot less saccharine than your typical $3 bargain-bin holiday CD.

Most of the songs feature choruses slightly more mature than Whoville town square, with Bing Crosby-era orchestration to match, although oddly they grate less than you'd think. Maybe it's because there's enough individual-oriented songs mixed in, such as a fairly soulful female gospel presence on "Christmas Is For Children," another woman's lilting vocals and the swing-era horns of "Images Of Christmas," and the male-female duet on "Old Fashioned Christmas."

There's some lameness such as "Christmas Samba," which is stripped of virtually all ethnic presence sounds like a white-bred relic from "The Lawrence Welk Show."

Similar: A majority of the 13 albums at the Jeffco site appear to be by Canadian artists, including Christmas Is For Children, Christmas Is My Love and It's Christmas Day.

I'm not a huge fan of smooth jazz, but I have a soft spot for percussionist Eric Darken, whose CDs I first saw on sale for 49 cents at the checkout counter of a strip mall fabric store.

For fusion fans, this freebie easily equals or betters mass-market albums like those GRP Christmas collections where maybe 20 percent of the musicians aren't mailing it in.

Darkin works best with strong compositions well suited to creative rearrangements, such as the elaborate percussion he can weave into the odd meters of "God Rest Ye Merry Gentlemen" and "We Three Kings." He's also credible turning "O Holy Night" into a vocal pop-gospel track. The relatively straight rockish "Angels We Have Heard On High" ends the album on an upbeat, if not overly hefty, note.

There's probably an equal number that fall flat. "Carol Of The Bells" is a synth-fest lacking lyrical presence and the arrangement depth of Mannheim Steamroller (remember we're talking relative qualities here). Some attempts to infuse new flavors into familiar favorite are misguided. The slow Latin gait of "The First Noel" is simply awkward, "Have Yourself A Merry Little Christmas" sounds like a synthesized rhumba track was substituted as an afterthought.

Similar: Bongobells also has A Merry Little Christmas and the double-disc Cool Jazz Christmas by Darken.

It's a shame more information isn't available about this jazz/rock album, other than being by some "Nashville studio artists," because it's a good one. It's very much like modern-era Manhattan Transfer, with instrumentals of substance conversing with a well-harmonized variety of small ensemble vocals.

"Angels We Have Heard on High has an off-meter beat reminiscent of Dave Weckl," while Joy To The World" goes for organ funk. Many are long enough for an instrumental solo of note, from the relatively straight-ahead modern piano of "Deck The Halls" to the blues/ fusion sax of "While Shepherds Watched Their Flocks By Night."

Maybe half the songs lack standout qualities, but that's not an awful ratio for a contemporary album—especially when it's free.

This double-disc set is one of those intriguing projects that nonetheless needs to be digested in bits, unless you really like "The Little Drummer Boy." Variations from strikingly creative to supremely tacky are featured by performers ranging from The Yellowjackets to The Jingle Cats.

Among the best arrangements: Cuba/L.A. combines a sharp-voiced violin and intense hand percussion. Ten Point Ten blends a rich college of complex percussion with an enticing mix of traditional and electric instruments. Kofi does a Ziggy Marley rock/reggae fusion with a few interludes of improvised vocals.

The Yellowjackets' reggae arrangement is OK, but not terribly creative or inspired, in the way songs with alleged commercial appeal tend to be on sampler albums. Daryl Stuermer's lite-fusion is one of the lesser tracks from GRP's first Christmas collection. For rock fans there's an '80s synth hard beat from White Heart, protest rock from Ray Stevens (who calls the drummer an intrusive neighbor who sounds like "the war in the Middle East") and vapid instrumental rock-ability from Bongolong.

Finally, for those who haven't heard the Jingle Cats—and those are all real cats with no pitch-shifting applied—their one track is all you need to "appreciate" them. Their album is hilarious for a few minutes and then becomes unbearably annoying. Those wanting to fully experience this form of madness can find The Animal Kwackers and The Singing Dogs at Bongobells. Twenty Little Drummer Boys isn't that bad, but the concept is similar—too much of even a good song goes sour on the ears quickly.

Similar: The Bongobells site also has double-disc variations of "God Rest Ye Merry Gentlemen" and "We Three Kings Of Orient Are," both well-suited for a multitude of arrangements.

A Christmas Yet To Come
Joseph Byrd

Bongobells says this 1975 recording was recorded by Joseph Byrd—described elsewhere as a freakish '60s psycho rock/pop keyboardist—using only an ARP 2600 Synthesizer. "The arrangements are very similar to Walter Carlos' 'Switched-On Bach' recordings, so this is rather vintage stuff and will not be for every musical taste."

That's a fairly dead-on assessment, although I found the album lacking the edge I was hoping for. The mix of thin and fat analogue synth sounds is wide, and the songs go beyond to the usual carols to include pieces like "Taublein Weiss" and "Carillon." But the performances are vanilla beyond the tonal changes, with few flourishes or improvised moments.

Similar: Switched On Santa features 13 songs Sy Mann on a Moog synth. The sound quality is bad—it sounds like a scratchy old LP—but the playing is a tad more interesting. 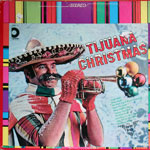 This sounds like a watered-down version of Herb Albert and the Tijuana Brass, although another reviewer suggests they are "deliberately cheesy parodies."

There are ten familiar songs, all about two or three minutes long, performed competently in that '60s TV-theme style, but without a lot of flair. The intensity is low to middling, with no bursts of intensity likely to inspire any "Tequila!"-like shouts. A small horn ensemble, muted vibes, simple percussion and fake harpsichord are the dominant tones.

The Albert influence/parody is strongly evident on "God Rest Ye Merry Gentlemen" and "What Child Is This?" (the latter clipping from "Taste Of Honey"). If all one wants is to set a mood in that vein without paying close attention to the songs, this will fit the bill.

Similar: A Christmas In Mexico and Christmas On The Border at Bongobells.