By C. MICHAEL BAILEY
December 19, 2015
Sign in to view read count
While there is a Holiday Music Canon, there are always pieces of music that lie just outside the periphery of definition. That, and I like to be liberal in what I consider holiday fare. Here are the stragglers this year, just making in beneath the wire. 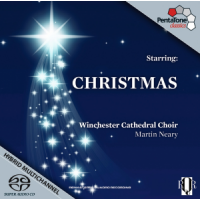 This recording of carols is special as it was originally recorded in 1973, intended for playback on one of the quadraphonic systems popular at the time. Originally released on Philips Classics, the recording was picked up by Pentatone and released as a part of its RQR Series. The 16 performances here are comparable to any number of Choir of King's College, Cambridge, save for the presence of a mixed choral group, a hall-mark of the choir since 1999. The repertoire is what would be expected of a British group: ancient melodies ("Es ist ein Ros' entsprungen," "In dulci jubilo") and carols from the English canon ("Coventry Carol," See amid the winter"). The SACD quality of the sonics makes this collection attractive for both standard and SACD equipment. The sound is better, more clear and accurate, than in the 1970s to be sure. Pentatone is showing that quadraphonic sonics were ahead of its time, just waiting to the technology to catch up. 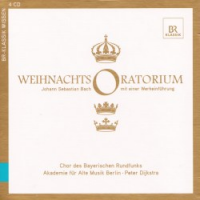 Conductor Peter Dijkstra and Chor des Bayerischen Rundfunks (Choir of the Bavarian Radio) has provided a healthy one-two punch of seasonal choral music with year. First, was a most excellent Messiah (BR Klassik, 2015), Dijkstra and the choir made with B'Rock Belgian Barockorchester Gent. Now is the re-release of a smoking Christmas Oratorio by Johann Sebastian Bach. Composed between 1733 and 1734 for the latter's Christmas season, the Christmas Oratorio si made up of six cantata, one each to be performed on the major feast days of the Christmas period: The first cantata (for Christmas Day) describes the Birth of Jesus, the second (for December 26) the annunciation to the shepherds, the third (for December 27) the adoration of the shepherds, the fourth (for New Year's Day) the circumcision and naming of Jesus, the fifth (for the first Sunday after New Year) the journey of the Magi, and the sixth (for Epiphany) the adoration of the Magi. Dijkstra evokes a certain dense brio from the compositions, nearly detonating the opening "Am Ersten Weihnachtstag," Jauchzet, frohlocket, auf preiset Tage.... Both of Dijkstra's new additions to the Christmas Classical Canon are among the best recorded with sumptuous sound a warm special presence. 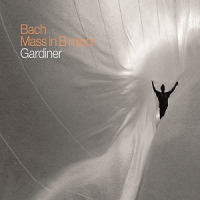 Johann Sebastian Bach was a Lutheran by religious tradition and the fact that he composed a musical setting of the complete Ordinary of the Roman Catholic Mass (in Latin) is a bit of a conundrum. The composition was not completed until a year before his death on 1750 and Bach worked on different portions of it as early as 1714 (when he composed the "Crucifixus"). Sir John Eliot Gardiner offers Bach enthusiasts the rare treat of two recordings of the B-Minor Mass in his long and fruitful professional lifetime. Gardiner's first recording was released on the Deutsche Grammophon Arkhiv imprint in 1986, performed with his English Baroque Soloists and Monteverdi Choir. Since founding his own label (Soli Deo Gloria) and completing his monumental Bach Cantata Pilgrimage, Gardiner has turned his attention to re-recording much his previous repertoire (Including the Brandenburg Concertos, the Motets, and the St. John Passion) The result of the intervening 30 years between recordings is the visualization of Gardiner and his art in full. If there was ever any question if God had Bach's ear or that Gardiner was the one to deliver the message to all, one need only listen no further than this performance of the concluding chorus, "Dona nobis pacern." Grant us peace... 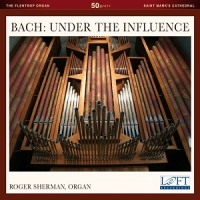 How can any right-minded classical music geek resist an organ recital entitled, Bach: Under the Influence? That is like a craft beer enthusiast resisting an ale called "Call-a-Cab." This collection was recorded in 2001 by organist Roger Sherman on Seattle's Saint Mark's Cathedral's Flentrop Organ celebrating the instrument's 50th Anniversary. The programming is clever to the point of cheeky. Its concept is much like that of Alan Feinberg's cleverly titled Fugue State (Steinway & Sons, 2015), where Feinberg concentrates on fugal compositions from the Baroque and Classical music periods. That was just a smart idea, and now Roger Sherman one-ups the concept in presenting an organ collection divided into composers who influenced Johann Sebastian Bach (Brunkhorst, Pachebel, and Vivaldi) and Bach works that influenced other composers. The result is a masters class in period organ performance. The sonics tend to be a bit distant (very distant in the case of Wachet afu, ruft uns die Stimme and Wo sol lich fliehen hin. A bright "Jesu, joy or our desiring" makes up for this as well as the "Prelude and Fugue in C Major," S 547. Not Christmas but included because of JJOOD. 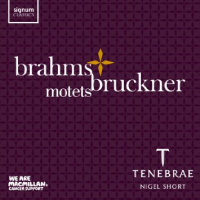 Composers Johannes Brahms (1833—1897) and Anton Bruckner (1824—1896) were nearly exact contemporaries. The German Brahms composed as if he saw himself as the keeper of Beethoven's flame. The Austrian Bruckner, a religious, humble man proved a critically frustrating and indecisive late Romanic visionary, whom his friend Gustav Mahler called, "half simpleton, half god." Both men were often at odds this that other German titan, Richard Wagner, doubtless to their considerable credit. A carefully programmed collection of motets by both composers makes for some very interesting listening. Where Brahm's choral writing bears a certain internal gravity, characterized by sharply defined harmony, Bruckner's writing is expressed with a wide-open pathos emulating well that composer's effort to effect cathedrals of musical worship (this can be heard in the Ave Maria). The vocal ensemble Tenebrae, directed by Nigel Short, is capture in well-balanced opulence. The sound is sensuously plush and warm. 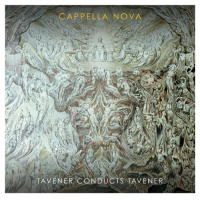 Estonian composer Arvo Pärt (b. 1935) had but one peer in the realm of choral writing: that of Sir John Tavener (1944—2013). Not to be confused with another British choral composer, John Taverner (1490—1545), the modern Tavener distinguished himself with his considerable corpus of sacred composition, strongly influenced by his Russian Orthodox faith (which he converted to in 1977). This present recording, Tavener Conducts Tavener is notable for the presence of two Tavener relatives: Rebecca Tavener, director of Canty and soprano in Cappella Nova and organist Alan Tavener. Included here are settings from Tavener's Resurrection, "Paradise Choir," that opens and closes this program. The disc contains pieces composed late in Tavener's life and recorded here for the first time. These include "A New Commandment" based on John 14:15-16 and 13:34 and "Nunc dimittis" based on Luke 2:29-32. Also included is a shimmering performances of "The Lamb" and "A Cradle Song" both from William Blake. While the title is a tease, this is an exceptional recital of Tavener music.