By C. MICHAEL BAILEY
November 22, 2015
Sign in to view read count
George Frideric Handel's Messiah shows no signs of slowing down 273 years after its debut in Dublin on that cool Irish Friday, 13 April 1742. This current year's batch of recordings includes a brand-spanking new release, two reissues, and one that got away from me. They are, in sum, a celebration of Il Caro Sassone and his masterpiece. 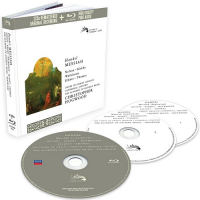 It was with this release that I drank the entire glass of period-instrument-and-performance Kool Aide. It is, coincidentally, the first period-instrument-performance recording of Messiah. Before 1980, I (and a good many other classical music listeners) had not thought in terms of performing classical music on the instruments available at the time of composition and debut, much less the tone, pitch and tempo differences, all which dramatically evolved during the Romantic and Late Romantic Periods. What I had to compare to were the performances of Sir George Solti and the Chicago Symphony Orchestra and Chorus (with Dame Kiri Te Kanawa) (Decca 1985) and Leonard Bernstein and the New York Philharmonic's 1956 Columbia performance, both back in the vinyl days. These performances were fine with fine soloists (though Bernstein took great liberties with the program), but were every bit modern instrument played and Romantically-informed in their sound. The strings were lush and voluminous and the tempi slow. Hearing Sir Christopher Hogwood's sharply captured strings and fast tempi was like the snare-shot opening to Bob Dylan's "Like a Rolling Stone." It blew open the doors of my mind and made me hear less Wagner and more Mozart, and hence, Handel, in the piece. Hogwood wrote the book on Handel...I mean, literally: Handel (Thames & Hudson, 2007) and he was kinetically engaged in the study of Handel's music, as well as its performance. An early period-instrument recording, the original sound was lacking. The strings screech and the natural horn difficult to play in tune. It would take the intervening 30 years for the technology to catch up. As the technology has evolved, so has the remastering techniques, and Hogwood's Messiah benefits mightily from it. This is not the best Messiah, but it is one for the ages. 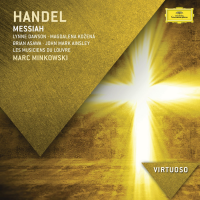 You know things are dangerous when otherwise mild-mannered classical music critics decide to savage the carcass of a new performance of a well-known composition. Such is the case universally with Marc Minkowski's Messiah. It was roundly panned when it was first released in 2001 on Deutcshe Grammophon's Archiv imprint and rereleased this year as part of DG's Virtuoso series. To be fair, it was entering a crowded field that included Hogwood's ground breaking performances mentioned above, as well as performances directed by John Eliot Gardiner, Martin Pearlman, and, more recently John Butt and Richard Hickox. In total, it is not a great performance, but it does have its charms.

The opening sinfonia is articulated clearly if a bit slow when considered from a period performance perspective. And I guess it is that, tempi, this is the problem. If Messiah is considered as a whole and heard almost as a living organism, one would hope that the global tempo of the oratorio was evenly presented. Minkowski's conduct sounds barely in control from one section to the next. His soloists all have the necessary chops, sopranos Lynne Dawson and Magdalena Kozema bringing their period bona fides to the performance. Well-performed and paced sections like, "He Was Despised" are clouded by rush-hour "And the Glory of the Lord" and "Hallelujah," the latter in danger of causing whiplash. Where many recordings of venerated music are like sex and pizza, where even the worst is still pretty good, not so with this Messiah. Handel's masterpiece needs a steady hand not found here. Minkkowski brings flashes of brilliance, like reading Goethe by lightening strike. 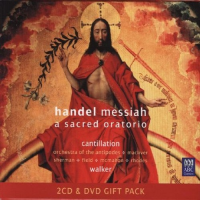 This 2002 Messiah is the first by an Australian orchestra and chorus. Conductor Antony Walker leads the Australian chorus Cantillation and the Orchestra of the Antipodes in a historically-informed, period-instrument performance of Handel's most famous oratorio largely based on Handel's own 1741 autograph manuscript. The past 30 years have seen any number of performance editions of Messiah recorded by all manner of orchestras. This is very much in keeping with Handel's own practice. Handel was a practical man and entrepreneur. He thought nothing of adapting a performance to the talent available to him. He changed keys, tempi and often programming to meet a given performance's needs. The composer certainly accounted for this in his 1741 manuscript seemingly designed to provide for performance contingencies. Walker's current approach boasts being authentic in having only five vocal soloists, a small choir, trumpets, timpani, strings, and continuo.

Walker's generally brisk and fresh tempos are executed with a commendable internal consistency across the expanse of the performance. Highlighting even the most demanding counterpoint with a light, transparency that reduces the longest passages of sixteenth notes to seamless air. Walker allows his soloists a wide berth for as much improvisation as is allowed in such performances, giving the performance a modern freshness. This is as lean a performance as was the Scholars Baroque Ensemble and Chorus recorded for Naxos records in 1992. The small forces employed make for a beautifully transparent performance spacious enough to walk about inside. I typically have favored these formats, and I do not change my tune here. This is how Handel heard it and I suspect he would be pleased now. Can there ever be too many recordings of Messiah. Well, in a word...no. 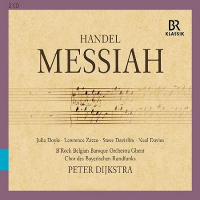 The only new Messiah recording of 2015 comes from Dutch conductor Peter Dijkstra leading "B'Rock—Belgian Baroque Orchestra Ghent. Founded in Ghent in 2005 with the intention for renewal and rejuvenation of Early Music performance, B'Rock is comprised of international musicians specializing in historically well-founded performance practices using period instrumentation. What separates them from every other current period-instrument band is an open mind and variety of repertoire and playing styles. Leader Dijkstra joined as the groups' first music director, bringing an intensity to the orchestra charter to do something different, something meaningful in Early Music and beyond. B'Rock has combined the established works of baroque composition with the lesser-known repertoire of the 17th and 18th centuries. Additionally, the group initiates and follows a bold and innovative programming policy where early and contemporary music meet and enrich each other. It focuses on presenting debuts of new music written with its historic instruments in mind.

This informed approach to performance enriches this fine present performance of Handel's masterpiece, allowing the oratorio to fully breathe this 21st Century air. True to their charter, the direction and performance is down-the-center period performance propelled with a renewed gusto for the music as written. Tempi and dynamics are executed with a fortitude and desire to making something new. This performance is the most evenly integrated of the performances considered here and stands as the best among these performances, the Hogwood notwithstanding. Dijkstra and B'Rock turn in a solid performance that stands with the best of the last decade. The soloists show no weaknesses (he shares the fine soprano, Julia Doyle with John Butt and his Dundune Consort, whose recent Bach Magnificat made waves). This is an exciting Messiah: solid and forthright, just as Il Caro Sassone would expect.