Following Christmas 2007: 1. In nomine Patris... The Past and keeping with this year's theme, the next batch of holiday discs represent the present. That is, Christmas fare appealing to the baby boomers. Again, the pickings are slim and there may be a stretch here, but it is a justifiable one. 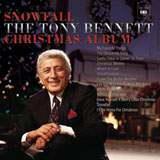 Those crafty devils at Sony have again made the record buying public purchase a disc twice. But, in this case, it is okay because it is Tony Bennett's 1968 many-times-released Snowfall with added tracks and a DVD side to the DualDisc. Anthony Dominick Benedetto is the closest link we have to the heyday of "popular music. At 81, Bennett remains a vital force in American music and his Christmas offering, like those of Frank Sinatra, are special uses of each man's immense talent.

This new release is a two-disc set that includes the same repertoire and order on the LP release that have been on the previous Snowfall releases, with the addition of a live performance of "I'll Be Home For Christmas from the Jon Stewart Show on Comedy Central (which appeared on the Snowfall collection in the CD age in 1994). On this DualDisc is included a DVD of Bennett footage from the 1980s and later. Five songs were culled from the production Bennett's Family Christmas from the available 19 originally released on VHS.

The audio and video are greatly improved from original releases. Failure to include all 19 performances from Family Christmas is the only gaff that mars this otherwise timeless collection. Bennett has the uncanny ability to sing anything and make sound it as essential as Shakespeare. This review requires no further elaboration. Even "poor Tony Bennett, something I have never heard, is better than the best of the rest. 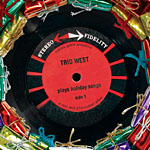 It takes stainless steel marbles to call out Vince Guaraldi on his home court and play holiday music to him, but that is exactly what Trio West does on Trio West Plays Holiday Songs. The brainchild of drummer Tobias Gebb, Trio West is filled out with bassists Neal Miner and Miles Brown and pianist Eldad Zvulun. The trio has produced the most compelling holiday jazz since Guaraldi's 1965 recording for the sound track of A Charlie Brown Christmas. In that soundtrack, Guaraldi introduces his Christmas song, "Christmas Time Is Here, which became an instant holiday classic. And Trio West covers it, handing it back to Guaraldi with a red bow.

This is no mere homage to Guaraldi. The listener will readily realize this from the beginning. Gebb and company breathe new trio life into these war horses covering much of the ground Guaraldi did and then forging ahead. An example of forging ahead is the coolest samba on "God Rest Ye Merry Gentleman. The musical tipple point is reached during the Afro-Cubano break after the first two choruses. Gebb adds a rim shot and cowbell to Zvulun's precise Latin chording and Miner's elastic bass. In an understated way, Gebbs take on this carol shoots it through the roof creatively. The drummer's manic drumming adds just enough chaos to make the song really interesting.

There are two arrangements of "Little Drummer Boy that grandly illustrate the true art of the trio. Vastly different, Trio West could roll each out in the same set and not cause one eye to bat. The main take is superb and the alternate out of control but both are perfect. These guys have chops to burn. The remainder of the recording makes for the perfect soundtrack to a holiday party or just easy listening. 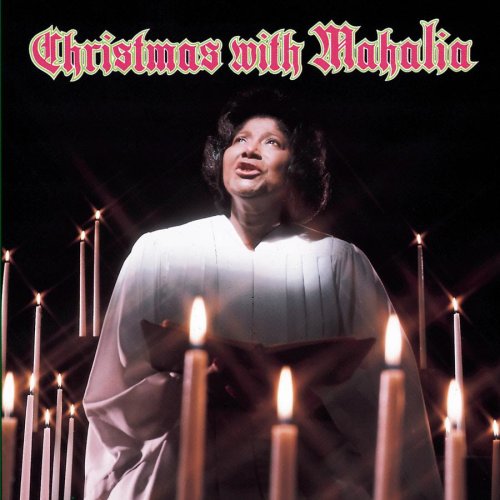 Columbia Records Memo / Date: circa Mid-1950s / To: Irving Townsend / From: God / Message: [In the vernacular of the period] Irving, you never have a woman as big and full of the Holy Spirit as Sister Mahalia sing "Silver Bells or "White Christmas. It is insulting to Me and Her. You leave that material for that Bennett fellow above. Sister Mahalia's talent is reserved for this jealous God. To your meager credit, much more appropriate material is provided this gospel empress in the staggering "O Holy Night where Sister Mahalia takes Cappeau's poem "Minuit, Chrétiens" and Aldophe Adam's melody, sifting her bitter experience through the the two, making them densely powerful with her New Orleans patois in a way never conceived by the song's effete French composers.

While "O Holy Night is a high point, you did benevolently allow Sister Mahalia several others. "No Room In The Inn echoes the Sister's humble upbringing in three rooms with 13 others on the north rim of New Orleans. The ancient English song "What Child Is This is infused with more pathos plus additional lyrics by my servant in a manner beyond a suit like you. Clever boy you are, Irv, you did provide Sister Mahalia the 16th Century German "Es Ist Ein Ros Entsprungen that she now owns since her breath passed the vocal chords singing this beautiful allegory.

Your choice of Marty Paich to arrange and conduct these pieces was also inspired, perhaps not by the same spirit, but inspired never the less. Paich never allows the proceedings to get whorey or in poor taste. I have big things planned for Paich, unlike you, who I will "go Old Testament on should you have Sister Mahalia sing "Rudolph The Red-Nosed Reindeer.

Tracks: It Came Upon The Midnight Clear; O Holy Nigh;t Listen; The First Noel; No Room In The Inn; Silver Bells; Happy Birthday To You, Our Lord; What Child Is This; White Christmas; Do You Hear What I Hear?; Lo, How A Rose E'er Blooming.