By GEANNINE REID
September 22, 2014
Sign in to view read count 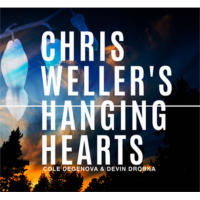 Composer and saxophonist Chris Weller was born and raised in Oak Park, IL. Weller sites his passion for music happened in eighth grade after hearing Charlie Parker. Weller attend Berklee College of Music on a scholarship from 2007-2010, where he received his bachelor's degree in Music Performance. While at Berklee, Weller studied with: George Garzone, Dave Santoro, drum master Rakalam Bob Moses, Ed Tomassi, Jim Odgren, Shannon LeClaire ,Greg Hopkins, Benny Golson and Mark Turner. Weller perfected his studies while performing extensively in various bands and ensembles that focused on styles of Jazz, Latin, and Hip Hop. After college, Weller returned to Oak Park where he currently resides, he teaches privately, and performs regularly.

In 2013, Weller formed a trio dedicated to the fearless exploration of group improvisation entitled, Weller's Hanging Hearts. The band features Weller on tenor saxophone and penning the compositions, Cole DeGenova on keyboards, and Devin Drobka on drums. The music is energetic, like a raw conversation that fearlessly links jazz, rock, and experimental genres. The trio's repertoire consists mostly of Weller's original compositions, however they are also known to deconstruct popular songs, and freely improvise.

The trio's debut album is self-titled, Chris Weller's Hanging Hearts and contains six selections that spans many colors and styles. Overall the trio conveys a music that is assertive, boisterous, celebratory, exploratory, sometimes cacophonous and always energetically focused. The trio is certainly comfortable with the flexibility of a smaller ensemble and the bass-less trio format. Here, the lack of a bassist instills an open forum, although DeGenova does fill the lower register to support the overall harmonic flow and Weller's various interval work, it does still have a different feel and language than when a bassist is involved.

"D Rover" is a funky sixteenth note based compositions that has a central harmonic setting of a two chord vamp that explores the many possibilities and colors of the sharped fifth on the first chord that finds its resolution in the flat seventh chord. The trio starts at level ten from the start, Drobka's drums are active and full of well-placed cymbal accents and colors. DeGenova's keyboards have a slight distortion to the sound and follows Weller's saxophone lines wherever they may lead. The trio certainly has their own language and the three have a unique chemistry to their 'free' style of playing. Weller's solo is built on a theme of methodically building lines to the upper register of his horn with a two note lower register cadenctial figure of either the sharp eleven played twice or the sharp eleven resolving down to the root. Overall, this gives his solo a form and a cohesive quality that keeps things together and musical. Drobka and DeGenova slowly disintegrate the groove to a medial section that finds DeBenova's left hand in an increasingly intense conversation with Drobka's fiery drum work that leads to a series of chord and drum hits for a fitting release. The two begin to build again using the hits and chordal figure as a starting point and the additional held cresendoing chords from DeGenova that eventually finds Weller rejoining with strategic stabs and honks. Slowly the trio works their way back to familiar harmonic and melodic territory for the restatement of the original theme and logical driving ending and disintegration for the final release.

Chris Weller's Hanging Hearts is encapsulated by a venture-seeking aura. The musicians' common language is of a searching quality as they toggle between introspection and aggression. The music projects an overabundance of intriguing propositions and diametric angles. Indeed, a top-shelf album that will require repeated listens.