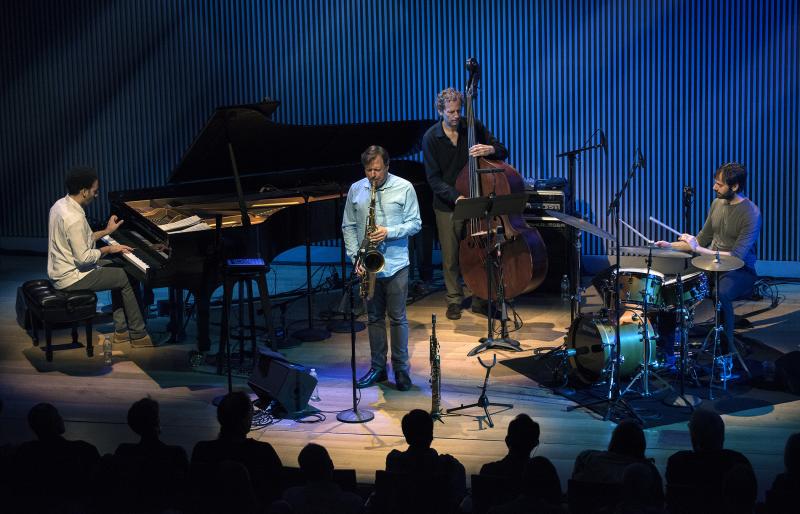 It is rare that two saxophonists share a bill with their quartets. It's even less common when one of the two is female. The two were Chris Potter and Melissa Aldana, and they shared the stage at SFJAZZ in San Francisco's Hayes Valley.

Aldana seemingly came out of nowhere to win the prestigious Thelonious Monk International Saxophone Competition in 2013, the first female instrumentalist to grab the prize. However, she is no stranger to jazz, having headlined since the tender age of 16. It is said that the fruit does not fall far from the tree, so it should come as no surprise that the Chilean native's father, Marcos Aldana, is also a talented saxophonist. And, like his daughter, he competed in the Monk competition in 1991, a year in which Joshua Redman came in first and Chris Potter third.

Potter, who was born in Chicago but grew up in Columbia, South Carolina, was inspired to play after listening to Paul Desmond. After mastering Charlie Parker's complex fingering, he made his stage debut on alto saxophone at the age of 13. He first gained street cred in New York City when he performed with Red Rodney. Over the decades, he has produced 19 CDs by his lonesome and innumerable others as a sideman (most notably, ten with Dave Holland and nine with Paul Motian). A long list of awards, as well as accolades from musicians such as Kenny Wheeler and Joe Lovano, attest to his mastery of the instrument. Aldana herself had this to say about him to Jazztimes: "Chris just does some ridiculous things on the saxophone that I don't hear anybody else doing."

First, it was Aldana's turn to show her stuff. Donned in a blue dress and black sandals, she brought her tenor to the stage and was joined by trumpeter Philip Dizack to introduce her tune "Elsewhere." "Perdon," by accomplished bassist (and fellow Chilean) Pablo Menares followed. Aldana soloed impressively throughout.

About halfway into her hour-long set, drummer Craig Weinrib launched into an extended drum solo, with an impressive workout on the sticks, as the other three looked on. Aldana's "Turning" was followed by a standing ovation.

Following an intermission, Potter, wearing a light-blue shirt and dark trousers, arrived on the stage; set a synthesizer on a stool, programmed it; and launched into the fiery "Yasodhara," a composition apparently named after the wife of the Buddha. Sporting an Afro, the Cuban-born David Virelles, a highly accomplished pianist, added to the percussive mix, as did drummer Dan Weiss, who demonstrated his versatility with both brushes and sticks. Potter played his tenor adroitly, adjusted his synthesizer and stepped back to let others solo.

At the beginning of "Sonic Anomaly," Potter told the audience "I'm very fortunate to be sharing a stage with these cats." The following two tunes—"The Dreamer Is The Dream" and "Ilimba"—clearly demonstrated why.

A standing ovation brought the ensemble back for the propulsive "Strike."