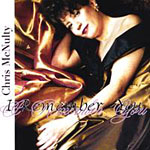 AAJ: How about the future of jazz singing, how do you expect it to evolve in the next 10 or 20 years? Will we run short of swing or is it forever like diamonds?

CM: There's a lot of competition in the vocal arena these days. I hear great things on a regular basis. I really dig that there's so many excellent singer/musicians out there, young and middle aged, it's a great time for us. We really don't have to be at the mercy of having to ask another musician to do this or that for us anymore—we can do it all ourselves. I think we're surprising not just ourselves but also a lot of musicians. We've become a lot more independent. I think that's the biggest development and course change that's happened to jazz singing in many decades. I'm proud to be a part of that new wave.

AAJ: Is it still easy to find rhythm sections that really swing?

CM: As far as swinging is concerned, for me it's hard to swing if the rhythm section isn't, however I will force the issue if I have to and I'm glad I come from enough tradition to know how to enforce the law if I have to.

Across the board I still hear something in great rhythm sections here, whether it be Victor Lewis and Ed Howard or Ugonna Okegwo and Billy Hart, that has a sensibility, intensity, drive and energy that I rarely find elsewhere, I think audiences pick up on that elsewhere and when they hear something like I've described I think they also know that they are being transported to a whole other level.

AAJ: How's the level of jazz musicians these days?

CM: I go out of the country a lot and while I'm often astounded by the standard of musicians I find out there, I don't always get the entire "thing." I get a lot of one thing or the other and it can be great, but the real subtleties are quite often missed.

That thing about listening and playing off each other, the level of harmonic and rhythmic development and freedom that has developed over decades and decades, that really happens as a result of intense competition and something else that is purely American and African at its root.

I guess that's what I heard back in 1985 when I left Australia for the first time. I also think on a musical level. I stayed because of it. I think that's why many players leave where ever they are so they can come here and learn about that, get it into their playing. Once you get it, it's hard to leave it behind... now that's American to the core and to me the essence of pure swing—a forward moving motion where all three of four components are divinely in sync while creating separate voices.

For me, the dividing line, the thing that separates it from everywhere else, is still that steaming rhythm section. I notice that some of that has been missing of late, players passing on. I especially miss Billy Higgins. Still there's enough going on that keeps me here with a knowledge that I can put together a tour, a recording and invite some of the greatest cats around to join me and just simply have a ball, playing challenging and swinging music or catch a subway and go hear it.

How could I ever leave? I love it too much.