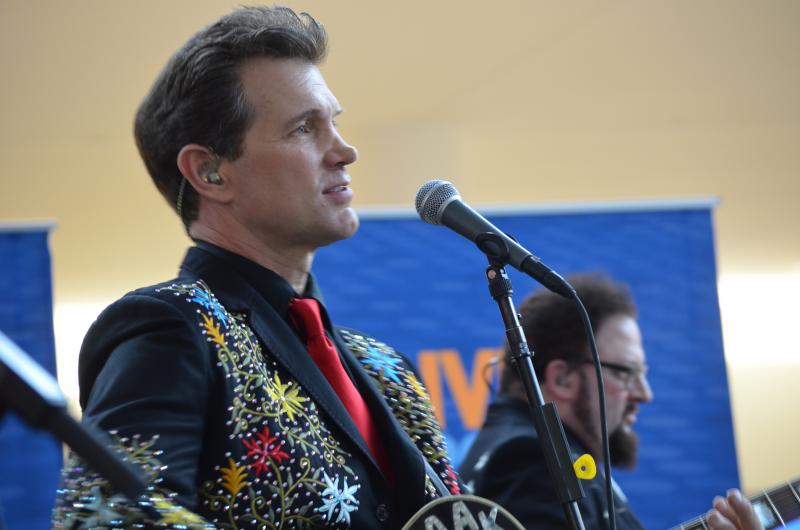 By CHRISTINE CONNALLON
December 31, 2011
Sign in to view read count
Chris Isaak
JFK Airport, JetBlue Terminal T5
Jamaica, NY
December 15, 2011
Strobe lights? Merchandise concession stands? Mosh pit? Try wheeled luggage, TSA scanners and 737s taking off, visible from the area by the stage. Even modern concert security doesn't normally involve taking off your shoes and belt, but this was not a usual performance.
Flight-weary passengers, as well as 40 lucky social media/internet contest winners, were treated to a delightful 40-plus minute set by perpetually youthful rockabilly heart throb Chris Isaak and his band, at JFK airport in New York City. A part of JetBlue's T5 concert series, these impromptu shows in the past three years have featured performances by Daughtry, Taylor Swift, Raphael Saadiq, Sarah McLachlan, James Blunt and Robyn.
As the crew deftly set up a solid half-hour prior to the show's published lunchtime start, Isaak and his band of five took the small stage in the center of the bustling hub, just slightly in front of a Jamba Juice, Lacoste boutique and Muji to Go. A large, decorated and stately Christmas tree stood across the way. As passengers spied the activity from their spots in the upscale food court of T5, or passing by as they grabbed a few magazines from a newsstand, a small crowd formed. Posters were propped up on easels in the area, as Isaak sang three songs in sound check, including reaching back into his bag of tricks for the highly appropriate "Flying." Clad in a black button-down, open at the neck, he acknowledged the early arrival of folks passing by. Winners from the record label's Facebook site meandered from their reception area adjacent to the stage, cameras in hand, ready for action.

With a very brief pause as Isaak and band suited up for the performance, the crowd around the small triangular stage quickly doubled in size. Decked out in a black, holiday-festooned suit complete with sparkles and other snowflake-like patterns on the front, back and pants, Isaak donned a red tie and bounded on stage with determination and enthusiasm, poking a bit of fun at the unusual circumstances that brought everyone together on this Thursday afternoon.

"And I just want to say thanks. This is kind of a dream come true for me, to take the band, go to an airport and go through security in a sequined suit. God bless JetBlue for making one boy's dream possible. I'd say more but I'm gonna tear up," Isaak chided. "Let's live it up, love it up, JetBlue style!"

Promoting Beyond the Sun (Vanguard, 2011) was natural for this musician. This is the music that Isaak grew up on, the vibe that hailed from the glory days of Memphis' legendary Sun Studios. With 23 concerts since the end of September in support of the CD, the band showed no signs of wear as it launched into tracks from the disc, including classics like "Ring of Fire," "It's Now or Never," "Great Balls of Fire," "Live It Up," and "Pretty Woman."

Calling to his keyboardist, Isaak said, "Scotty, we're at the airport in the afternoon but still, love is possible between these people. Go ahead and play something pretty for me." Plunkett launched into "Can't Help Falling In Love," presenting the crowd with another recognizable favorite that drew applause and cheers.

Isaak and crew could not leave out some of their original classics, like the ever-popular "Wicked Game," as well as the driving beat of "Baby Did a Bad, Bad Thing." Without a wrinkle and still sporting his signature pompadour-style hair, Isaak could have easily been mistaken for a man much younger than his 55 years. And as he tends to put his name on things like his guitar, belt and guitar straps, it's hard to not pick out this handsome blue-eyed crooner in a crowd.

"We really haven't taken a political stance before, but I'm going to go out on a limb today and hope that some of your will agree with what I'm saying with this song because it kind of says where I'm coming from," Isaak deadpanned, breaking into "Rudolph the Red Nosed Reindeer." Holiday favorites definitely had a place in this show as "Hey Santa" and "Blue Christmas" were also covered.

From holiday favorites to the music of an era gone by, Isaak and his group put smiles on the faces and a spring in the step of many a traveler randomly heading through John F. Kennedy airport in New York City on a brisk and sunny winter afternoon. What better gift could there be?