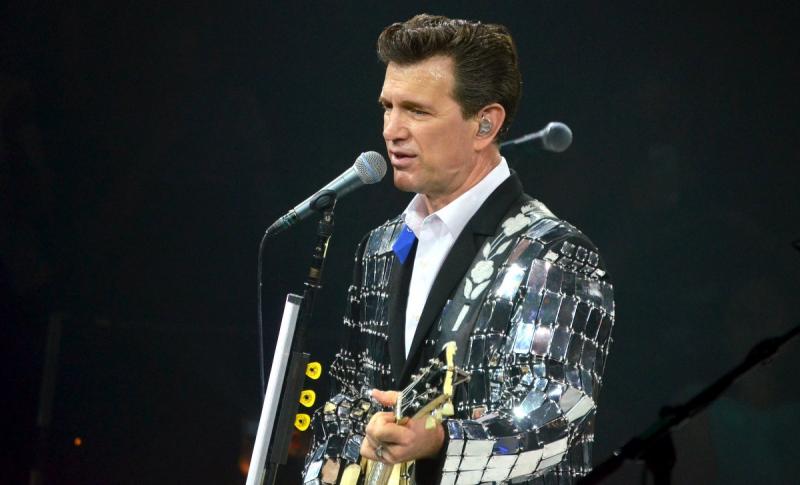 A week before Christmas, the chilly winds swirling around the north shore of Long Island welcomed Chris Isaak and his band to the Paramount in Huntington for his 2014 Holiday Tour. Holiday spirit was in the air and the crowd was ready for a show.

The night kicked off with a short but well received opening set by singer/songwriter Jeff LeBlanc, who shared that he was happy to be home on Long Island. He introduced his first song by saying, "This song was used in a make out scene on TV" and breaking into "What Do You Got To Lose." The set included a cover of "Let's Stay Together" a song he learned for his friend's wedding and now loves to play. LeBlanc, engaging and amiable, finished up by playing "Until We Get It Right," a song he proclaimed is "big at Applebee's and Kohl's."

Emerging after the set change resplendent in a green suit with sparkled snowflakes emblazoned everywhere and sharp white shoes, Isaak thanked the crowd by saying," If you don't get off the couch and support live music, then I'm just running around Huntington in this suit, being heckled by people who say "Hey, Ice Skater." No kids, I'm actually a semi-professional entertainer." "Gone Riding" was the first high energy number on the set list, which spanned his decades long archives of rock as well as holiday material. "Somebody's Crying" and "I Believe" followed, with the self-deprecating Isaak calling the show "slightly better than you'd see at a bar mitzvah but not state fair level entertainment, yet." As the ever-youthful crooner who looks like he stepped off the big screen headed into the crowd, he joked, "I'm part of the band but I'm also independent." His fan base in the crowd, which ranged from teenagers to the retirement gang, loved the interaction as he sat on someone's lap in the audience and engaged people sitting on the main aisle.

With a solid group of musicians that Isaak has surrounded himself with for decades, the set was tight. Longtime friend and partner in crime, Kenney Dale Johnson reigns supreme from his vantage spot behind the drum kit. Iconic bassist Rowland Salley, always to Isaak's right, is a gem to watch, as he is truly joyful as he plays. Guitarist Hershel Yatovitz, a powerful force on stage, is accessible to the audience and happily interacts with fans. Pianist Scott Plunkett has Isaak's sense of humor and is often an accomplice in on stage jokes. Percussionist Rafael Padilla completes the equation and adds a delightful Latin flare. Together, this band creates magic, palpable to the audience.

The holiday hits included "Rudolph" and "Blue Christmas" complete with a life sized animated Santa on stage. Isaak relayed a hilarious tale of buying a Santa in Australia because he thought that kids would like to see it on stage while he played. The kids did. Except for the time in California when he saw a child and Dad in the audience who seemed to be enjoying the show, then suddenly looked horrified, as Santa's head had fallen off! Other holiday hits included two Isaak originals "Christmas on TV" and "It's Got to Be Good." Yatovitz came off the stage for "Here Comes Santa Claus" engaging with the crowd.
Fans rocked out to "Notice the Ring," "Please, " Wicked Game," " Don't Make Me Dream About You," "San Francisco Days" and "Blue Hotel." Covers of Elvis Presley's "Can't Help Falling in Love," Roy Orbison's "Pretty Woman" and Get Rhythm - A Tribute to Johnny Cash's "Ring of Fire" drew raucous applause.

A brief instrumental signaled the time for Isaak to change into his ever popular mirror-clad suit for the encore portion of the show. "Big Wide Wonderful World" was followed by "Great Balls of Fire" and finally "Can't Do a Thing To Stop Me." The same brisk winds welcomed the crowd out onto the street, under holiday decorations, with heads full of songs that would linger there long after they got home.