Chris Isaak at The Paramount in Huntington, NY 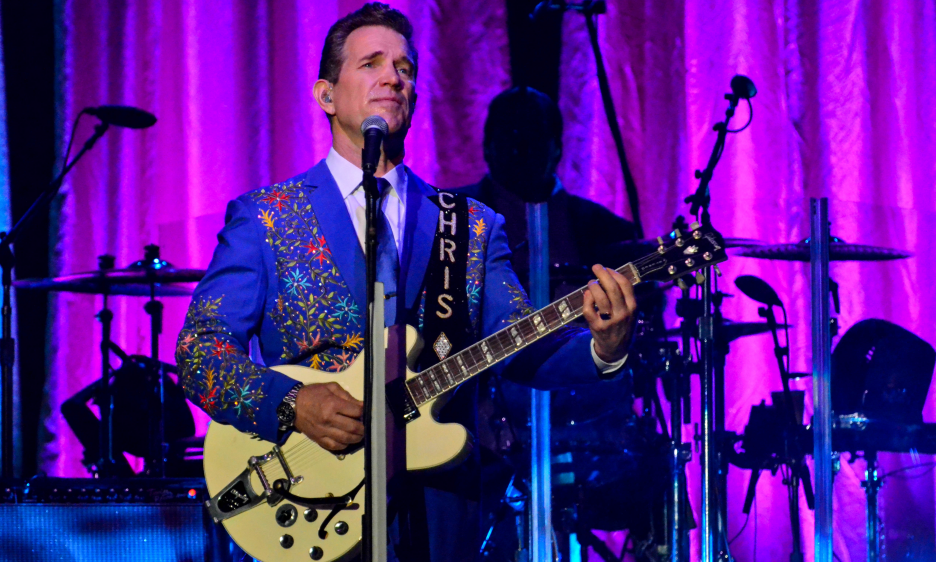 The perpetually youthful, now sixty-two year old musician burst onto the stage the way he burst onto the music scene over thirty years ago, when he signed to Warner Brothers and subsequently released the CD Silvertone (Warner Brothers, 1985). The crowd at the The Paramount in Huntington, New York spanned multiple generations and was clearly there for an Americana show, with flair.

Isaak delivered. In a resplendent, vibrant blue suit with colorful embossed patterns, white button-down shirt and a perfect pompadour, it was game time. Part comedian, part guitar wizard, part crooner, and all entertainer, he shines even before he dons the mirror suit for the encore. But that's a story for later.

Crowd favorites "American Boy,'" "You Owe Me Some Kind of Love," and "Somebody's Crying" kicked off the show. With no opener and no intermission, Isaak meant business. This was a two-hour party chock full of hits, classics and covers.

Switching the set list up is something Isaak does, sometimes on purpose and sometimes by accident. The combined efforts of the incredible Hershel Yatovitz on guitar, iconic Rowland Salley on bass, colorful Scott Plunkett on piano, Cuban-born percussionist Raphael Padila, and longtime Isaak friend and pillar of the band, Kenney Dale Johnson, back behind the drums was pure magic. The connection between the members of this tight band was practically palpable.

Nothing was off limits for the evening's set list, which hearkened back to early hits like "Livin' For Your Lover," "Don't Make Me Dream About You," and "Two Hearts." The radio-friendly songs that brought Isaak into the hearts and collective consciousness of the world were also in the mix, including "Wicked Game" as well as covers like "Oh, Pretty Woman," "Can't Help Falling In Love," and "Ring of Fire." The always popular "Blue Hotel" "San Francisco Days" and "Notice the Ring," closed out the show.

After a slight break in the action Isaak and crew were back on stage, this time with the master of ceremonies decked out in a suit completely covered in pieces of mirror. Though the sheer weight of the jacket must be confining, his energy was not in any sense restricted. Blue eyes shining, hips swaying, he started the encore with "Baby Did a Bad, Bad Thing" before launching into a jazzier version of "Can't Do a Thing (To Stop Me)." He bid the audience adieu saying," You're the reason we love playing here," gesturing to the crowd. "Thanks for coming out."