Chris Isaak at the NYCB Theatre at Westbury 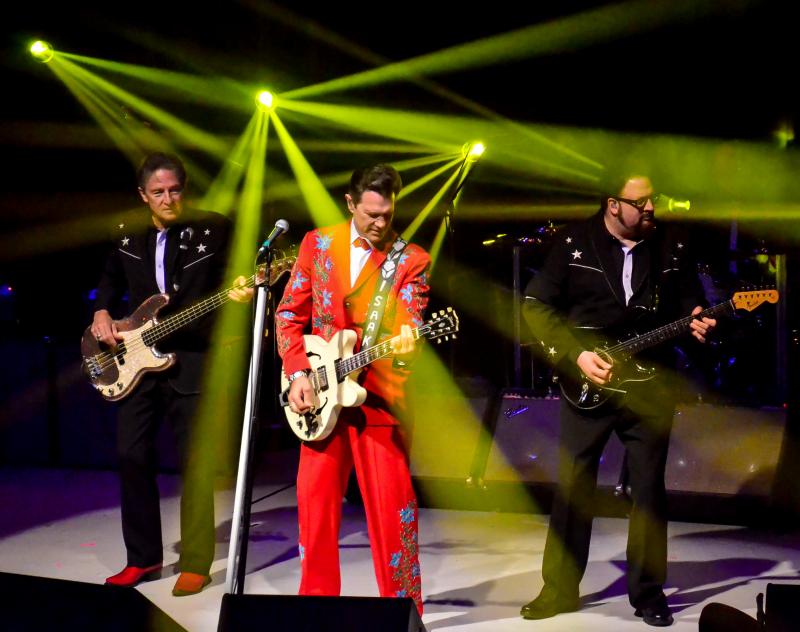 By MIKE PERCIACCANTE
May 15, 2016
Sign in to view read count
Chris Isaak
NYCB Theatre at Westbury
Westbury, NY
May 5, 2016

After over 30 years, Chris Isaak continues to appear as though he bathes regularly in the Fountain of Youth. With his 60th birthday looming, the musician looks decades younger than his birth certificate reveals. His high-energy performances rival those of much younger performers.

Isaak, whose breakthrough and biggest hit, "Wicked Game" was released in 1989 on the Heart Shaped World album (Warner Brothers) looks nary a day older than he did when he was writhing in the surf with supermodel Helena Christensen. Now, in 2016 touring behind his latest release First Comes The Night (Vanguard Records, 2015), Isaak, though older, delivered a performance at Westbury's NYCB Theatre that was just as energetic as those he gave when he first appeared on the music scene.

Appearing on stage clad in a red suit adorned with embroidered flowers and balck and white sprats on his feet, Isaak and his band dazzled the crowd with a mix of rock, rockabilly, pop, and '50s inspired songs. Between the songs, Isaak engaged his audience with witty and self-deprecating banter. He even referred to himself as a "semi-professional entertainer."

Isaak's band served as both an elite backing group during the show and as foils for Isaak's good-natured kidding. Long time friend, Kenney Dale Johnson (the Panhandle Pounder) mans the drum kit, along Rollie Salley on bass and percussionist Rafael Padilla, held down the driving rhythm section. Lead guitarist Hershel Yatovitz, played a number of different six and twelve string instruments to perfection. And pianist Scott Plunkett delivers the boogie-woogie that defines many of the faster numbers. Each member of the band, at some point during the show, served as an accomplice to Isaak for a comedic interlude. This included the "Ask Kenney" portion of the show when Isaak gave audience members that opportunity to "ask him anything. Kenney is an expert on life, love and small engine repair." As this point a fan asked Kenny for a good chicken soup recipe. When Isaak asked Plunkett what he'd like to play, Plunkett asked if it could be anything. After Isaak responded affirmatively, Plunkett said, "Okay, I'd like to play a rock 'n' roll song." He and the band immediately launched into the Jerry Lee Lewis classic "Great Balls Of Fire."

The show was much more than a musical variety and comedy show. It was a rock show. Isaak and the band roared through a set that included old favorites ("Dancin,'" "Somebody's Crying" "Two Hearts," "Wicked Game," "San Francisco Days," "Blue Hotel" and "Baby DId A Bad Bad Thing"), new songs ("Down In Flames," "Running Down The Road," "First Comes The Night," "Perfect Lover" with its Roy Orbison vibe and "Please Don't Call") and choice covers ("Oh, Pretty Woman" which Johnson dedicated to "all the womens," "She's Not You," "Solitary Man," "Can't Help Falling In Love" and the previously mentioned "Great Balls Of Fire").

In addition to the top-notch musicianship and amusing banter, a Chris Isaak show has certain constants. Early in the performance, Isaak will take it upon himself to tour the crowd all the while singing, playing and shaking hands. On this night, he took the tour of the intimate arena during "Don't Leave Me on My Own." When the song ended, he quipped, "Thanks for coming. Drive safely!" During the encores, Isaak makes a real spectacle of himself. He becomes musician, showman and art installation. After the final notes of the closing number of the main set, Isaak rushes back to the dressing room and quickly changes into a mirrored suit. Fans await this during every performance. Photographers have been heard telling their comrades to not miss the encores. Isaak never disappoints. On this night when he returned to the stage wearing the suit, the spotlight immediately found him and the mirrors projected a wonderful lightshow across the venue.

Even though the mirrored suit must have weighed a ton, Isaak's energy level was the same during the encores as it was during the earlier portion of the show. He danced, he juked, he sung and he strummed his guitar while the band drove it home. The encores included "Big Wide Wonderful World," a duet with Johnson on the cover of Merle Haggard's "I'm A Lonesome Fugitive" and "The Way Things Really Are" which coincidently also closes the First Comes The Night CD.

When the song came to an end, Isaak and his band members were obviously exhausted; they were all drenched in sweat. Nonetheless, after taking their bows and waving to the crowd they took the time to shake hands with and personally greet some of the fans who had crowded near the stage. After they had left the stage, the fans many of whom were just as drained and sweaty from dancing through the night, headed toward merchandise stand to engage in some retail therapy and ultimately the exits.