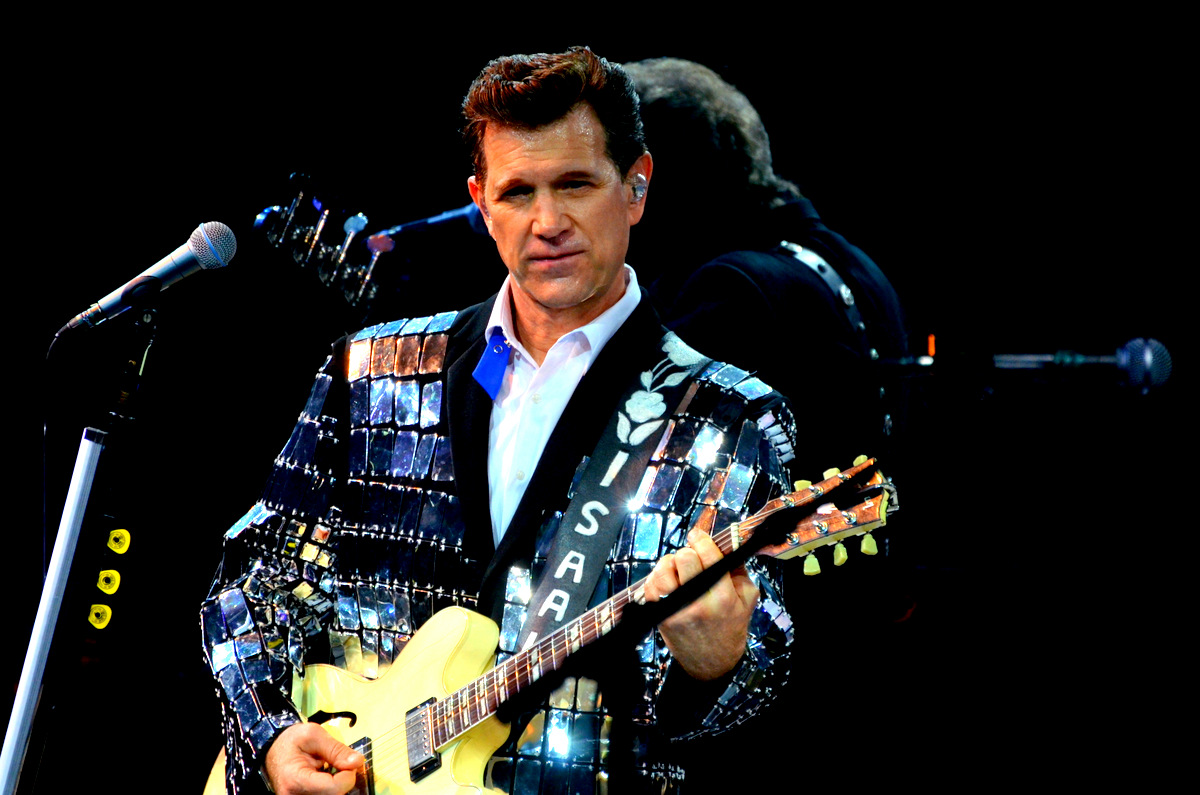 The perpetually youthful musician burst onto the stage the way he burst onto the music scene 30 years ago, when he signed to Warner Brothers and subsequently released the CD Silvertone (Warner Brothers, 1985). The crowd at the NYCB Theatre in Westbury spanned multiple generations and was clearly there for a rock and roll show.

Isaak delivered. In a resplendent, vibrant blue suit with embroidered silver patterns, white button down and a perfect pompadour, it was game time. Part comedian, part guitar wizard, part crooner, and all entertainer, he shines even before he dons the mirror suit for the encore. But that's a story for later.

Crowd favorites "Gone Ridin,'" "Somebody's Crying," and "I Believe" kicked off the show. With no opener and no intermission, Isaak meant business. This was a two-hour party chock full of hits, classics and covers. Isaak even doled out droll advice, like "There are two rules: number one, get a bedazzler. Number two, let your freak flag fly!"

Switching the set list up is something Isaak does, sometimes on purpose and sometimes by accident. He chided the crowd, "I got confused. The nice thing about having the same band for 30 years is that you can throw anything at them." The combined efforts of the incredible Hershel Yatovitz on guitar, iconic Rowland Salley on bass, colorful Scott Plunkett on piano, Cuban-born percussionist Raphael Padila, and longtime Isaak friend and pillar of the band, Kenney Dale Johnson, back behind the drums was pure magic. The connection between the members of this tight band was practically palpable.

Early in the show, Isaak hopped off the stage, meandered through the equipment and launched himself into the crowd, wandering through the aisles among his fans, at one point stopping to pick up and cradle an adorable white dog that belongs to a member of his management team as the fans went bonkers. He made his way through the venue, sitting down next to people and even taking selfies with them as he sang. A fan tossed M&Ms to him, a perplexing gift.

"Usually the hardest part is hitting the high notes," he told the crowd on his return to the stage. "But tonight it was figuring out your camera." He pantomimed scrolling through an electronic device, "Photos of your uncle. .. You really don't know what kind of an audience it is till you get in the middle of things... and you're an M&M throwing mob," he joked.

Nothing was off limits for the evening's set list, which harkened back to early hits like "Lie to Me," "You Took My Heart," and "This Love Will Last." The radio-friendly songs that brought Isaak into the hearts and collective consciousness of the world were in the mix, including "Blue Hotel," "Wicked Game," and "Baby Did A Bad, Bad Thing." Roy Orbison songs were accounted for, including "Only the Lonely," "Ring of Fire" and "Oh, Pretty Woman," which closed out the show.

After a slight break in the action Isaak and crew were back on stage, this time with the master of ceremonies decked out in a suit completely covered in pieces of mirror. Though the sheer weight of the jacket must be confining, his energy was not in any sense restricted. Blue eyes shining, hips swaying, he started the encore with "Big Wide Wonderful World," followed by the Jerry Lee Lewis classic "Great Balls of Fire," and finally his own "Can't Do A Thing to Stop Me," before launching into one last cautionary tale.

"This is a lover's song," he began slyly, telling people that if they were there with the one they love, it is meant for them. And if they were alone? "You're saying, 'what about me?' Well, this is the perfect song to think about why you're alone..." and off he and the band went into elvis' "Can't Help Falling In Love." As the song ended, Isaak flipped his guitar over to show the crowd the letters that spelled out "Thanks A Lot" on the reverse side. Ever the consummate showman, Isaak thought of everything.