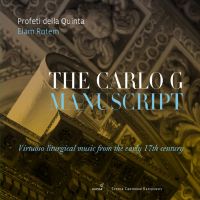 One gets to the point where only the most obscure music is satisfying. Enter The Carlo G Manuscript. The only thing this story lacks is murder and a donkey. About 15 years ago, a portfolio now known as the "Carlo G Manuscript" was purchased at a Vienna yard sale for the equivalent of $65. This obscure portfolio lead to a doctoral thesis, its pages made available on the internet, and the original subsequently sold by Sotheby's at auction to an anonymous buyer in 2007, thus disappearing. The name of the portfolio derives from the fact that the surname of its author was illegible when the documents were originally purchased. No matter, this music is date from the 1600s and any unknown music that old must be heard. Much of the manuscript is presently performed Profeti della Quinta, under the direction of Elam Rotem. The music certainly sounds from the period and is exquisitely rendered here, being captured in the warm confines of the church of Saints Eusebio and Vittore in Peglio, Italy. Nothing beats that combination. Highly recommended.

With every new Arvo Part or John Tavener recording released, we listeners of short attention spans get further away from another choral titan of the 20th Century, Sergei Rachmaninoff. While best known for this piano works, Rachmaninoff composed two important a cappella choral works: Liturgy of St. John Chrysostom (premiered November 10, 1910) and the presently considered All-Night Vigil (premiered March 23, 1915). The piece consists of treatments of the liturgical narratives from the Russian Orthodox All-night vigil ceremony. Composed in less than two weeks in 1915, All-Night Vigil is considered Rachmaninoff's greatest achievement (no small feat considering the same guy composed the Piano Concerto No. 3 in D minor!). Glorea Die Cantores, under the direction of Peter Jermihov provide an expansive and sumptuous interpretation of the vigil, with exceptional sonics and engineering. The sound here is BIG when it needs to be and a whisper when called for. The performance is at one majestic and solemn. Moving and emotive, this is an worth Vigil.

Harry Christophers and his crack chorus The Sixteen, move beyond the Medieval and Baroque in to the 20th Century with the Choral Music of Francis Poulenc. While the recording is not a complete reading of Poulenc's choral corpus (it lacks Quatre petites prières de Saint François d'Assise). That quibble aside, what is recorded are the Quatre motets pour un temps de pénitence, Quatre motets pour le temps de Noel, Litanies à la Vierge Noire, Salve Regina, Ave verum corpus and Mass in G, plus the secular cantata Un soir de neige. Sonically The Sixteen are captured in a particularly warm and close atmosphere accentuating both the majesty and familiarity of the texts. Of particular note are the superbly rendered Ave verum Corpus and the Mass in G Major, the fist presented with a slow consideration and the latter, brightly. The Sixteen surpass themselves with this 20th Century fare making this a recording to beat in the genre. 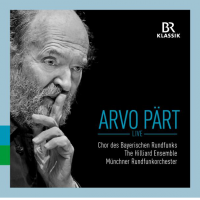 Speaking of Estonian composer Arvo Pärt, Peter Dijkstra and his Münchner Rundfunkorchester, joins forces with The Hilliard Ensemble and the Chor des Bayerischen Rundfunks for a live collection of Pärt's works presented in concert between 2000 and 2011. Dijkstra has most recently been devoting himself to older repertoire (Bach and Handle) but discharges his duties will with this modern fare. Featured here are notable performances of "Cantus in Memory of Benjamin Britten," "Seven Magnificat Antiphons" for mixed choir a capella, "Cecilia, vergine romana" for mixed choir and orchestra, and the vocal work "Litany—Prayers of St John Chrysostom for Each Hour of the Day and Night" for soloists, mixed choir and orchestra, the latter melding historically with the Rachmaninoff above. This recording is an excellent introduction to Pärt's near mystical ideal of tintinnabuli. BR-KLASSIK captures all of the composer's earnestness and adoration. We are living in a grand period of choral composition and Pärt is the dean of that composition. 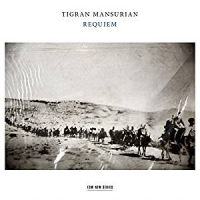 Tigran Mansurian is touted as Armenia's foremost composer. With the release of the RIAS Kammerchor and Münchener Kammerorchester, under the direction of Alexander Liebreich's recording of Mansurian's 2011 composition, Requiem he should be considered equal on the stage with Arvo Pärt and John Tavener as a foremost composer of sacred music. Composed as artistic acknowledgement of the 1917 Armenia Genocide by the Ottoman Empire in the shadow of World War I, Mansurian's Requiem was finally completed after a number of false starts. The composer reasoned that his difficulty in competing this work was due to his careful combination of Eastern Orthodox and Roman Catholic tradition. In essence, Mansurian attempts to heal the Great Schism of 1054, even if only musically. The resulting work is one of great dignity and humility. Mansurian finds a sympathetic advocate in Manfred Eicher and ECM Records, much in that same way as Arvo Pärt thirty years ago. Lets hope for much more from Mansurian on ECM.