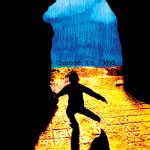 As the baby boomer generation begins to enter retirement age the challenge of attracting a younger demographic to jazz is something that simply cannot be ignored. With that comes a need to open up to jazz as an expanding and expansive genre that retains its modernity by accepting musical shifts going on around it.

Choose to Find is a young Boston-based group that isn't jazz by any conventional definition. With a wealth of influences ranging from Björk and Radiohead to Steve Reich, Keith Jarrett and Brad Mehldau, its self-titled debut sounds more like broad-spectrum rock instrumental than jazz. But sneak a peak under the covers and there are plenty of jazz elements. They've simply been absorbed into a more stylistically all-inclusive whole.

Formed by keyboardist/composer Todd Marston, the group's first incarnation didn't include guitarist Colin Sapp, who he'd met while studying at Berklee. But it was the recruitment of Sapp, along with bassist Dmitry Ishenko and drummer Michael Daillak, which allowed Marston to realize a distinctive combination of forceful rock attitude, processed sounds, anthemic melodism and complex meters.

Fans of The Bad Plus and EST will find much to like about CtF, though the improvisational aspect of CtF is less overt. Marston writes songs, with a strong thematic component. The rhythms are often backbeat-driven, even when they're in odd meters, and delineated solos are hard to find. Still, "Can't Pretend features an ostinato at its halfway point that gives Daillak a chance to stretch. Sapp plays a more textural role throughout, creating a wall of sound that's at its peak on tracks like "Family, which also features some of Marston's best playing on the album.

While CtF's collective jazz cred is impressive—work with artists including Sonya Kitchell, Kurt Elling, Joe Lovano and Marty Ehrlich—it's clearly looking for a new space where a rich language is but one aspect. People looking for freewheeling improvisation may find little appealing about Choose to Find. But for those who are excited by unexpected stylistic cross-pollination, Choose to Find is a powerful and captivating debut from a group with plenty of potential to bridge any generation gap.

About Choose to Find