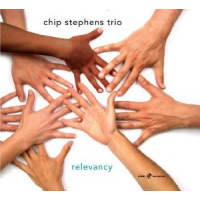 Chip Stephens is an impeccable technician, a clever, even daring composer, and a restless explorer of melody. Adept at swing and complexity, he unfurls piano lines with a restless authority that marries brawn to delicacy in this collection of originals and transmogrified standards.

Bracketed by a brisk, darting take on Carla Bley's angular "Syndrome" and a breakneck rendition of Bill Evans' "34 Skidoo," Stephens' second Capri CD never flags. It traverses the blues ("Somewhere Before the End"), swing (Sammy Cahn's "Be My Love," done proud and strutting), and the introspective and modernistic ("A Day in May," perhaps the most autobiographical tune, starts as a ballad, then devolves into something more narrative and architectonic).

Far less known than he should be, Stephens is a rippling player equally at home in Bley's "Syndrome" as in Rodgers and Hart's pensive "This Funny World." He's strong in both hands, giving his forays an equity of unusual mass and power. Sparked by the tasty drums of Joel Spencer (check out how he channels Philly Joe Jones on "Be My Love," also a showcase for Dennis Carroll's pointillist bass), "Relevancy" is a kind of comeback.

Stephens' third CD—the first, Bootcamp, was released on the Cleveland label Azica in 1994—is a lamentation-celebration for his father, who died in 2012, as well as a tribute to his own resiliency. In 2008, Stephens and his two sons were in a car accident so bad it was not known whether Stephens would be able to talk or walk again, let alone resume playing piano.

Stephens has indeed returned to playing piano, in spades. "C Hip's Blues," a sassy, heavily chorded affair, swings like a lost Bobby Timmons cut, and "This Funny World"—patient, rubato-steeped, darkling—addresses his reinvigoration with appropriate gravity. The one complaint is that the order of tunes on the jacket doesn't reflect the recording's sequence: "C Hip's Blues" precedes "A Day in May," not the other way around. But that's a design-layout issue.

As a sideman, Stephens is dramatic without ever being a showboat. As leader of this trio, he's authoritative and original, even in his interpretations. What the listener is likely to take away from this excellent CD is an impression of power and clarity, attributes that always make for memorable jazz. Good to have Stephens back on the set.

Track Listing: Syndrome; Like Someone in Love; Somewhere Before the End; This Funny World; C Hip’s Blues; A Day in May; Be My Love; 34 Skidoo