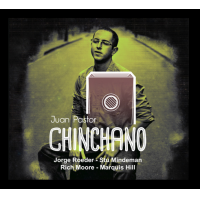 Pastor experiments with a more "ECM" floating feel on the tune "En Otro Talvez," while "Negra Presuntuosa" features a Lando pattern in 6 and gives way to a more traditional modern jazz feel at the end of the track. "Lucia" is reminiscent of a Steps Ahead style ballad and Keyboardist/Producer Paul Mutzabaugh lends a beautiful Hammond B3 harmony to the mix.

While this album prominently features polyrhythms in groupings of six, surprisingly few of the patterns actually fall into the well known "Afro-Cuban 6/8" style. With the exception of a clave here and there, most of the actual patterns are set by the cajon and do not feature any sort of lead voice from a bell or cascara sound. "Tiene Picante" comes as close to a traditional "Afro-Cuban 6/8" pattern as any track on the album, though the feel is fluid and dynamic, especially during the drum solo.

One of the more unique tracks on this album, "Avellana" experiments with a Coltrane-ish free jazz vibe before the chord changes set up the melody. Obviously a nod to keyboardist Stu Mindeman, "Amigo Stu" prominently features a bass/piano left hand unison riff and the combination of muted trumpet and clarinet provides an interesting texture in the melody. The final track "Andino" works in a bass and cajon dialog interspersed with melodies and solos by both Pastor and Roeder.

Long dominated by Cuban, Puerto Rican, and Brazilian artists such as Gonzalo Rubalcaba, David Sanchez, and Eliane Elias, the Modern Latin Jazz genre has now been graced with a new element in its sonic palate. Juan Pastor's "Chinchano" proves that traditional Peruvian music has found its place among the styles of jazz that define the artform.