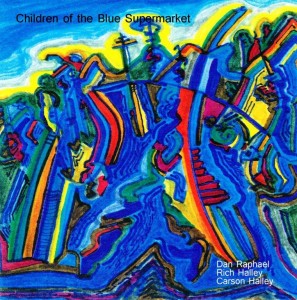 The relationship between word and music dates back to before their appearance around the time of King David, who presided over the greatest union of the two, sang and probably danced to his own Psalms. According to John the Evangelist, in principio erat verbum—or, as the Latin from his most celebrated introduction to his Gospel—states, "At the beginning there was The Word..." It seems, from John, that in the sound and the fury of God, in the very kinesiology of the Universe did word and music collide. It would also seem that this very collision that has continued—off and on throughout the ages, through the time of David—is a celebration of the intellect, and this is what is as vital and significant as the album representing the art of Dan Raphael and Rich Halley.

While Children of the Blue Supermarket may not be anything new (and there is ample evidence of this point from the oeuvre of the late Gil Scott-Heron, The Last Poets and the early meetings of Charles Mingus and Langston Hughes) it is a superb encounter by any account. In it, the dry and huge sound of Rich Halley's tenor saxophone is pitted against the long, labyrinthine and sometimes broken lines narrated, with rich sonority, by Dan Raphael. Raphael's concrete imagery often lapses into the surreal, but this does not indicate any confusion in perspective or in artistic vision. His deeply ironic sensibility alleviates the sometimes dark nature of his poetry. Raphael also has an instinct for cadence and rhythm. He weaves his words in and out of the pulsations of Carson Halley's drums and percussion as well as Rich Halley's occasional percussion.

The elder Halley has an even keener instinct for rhythm and harmony. Despite the dry tone of his tenor, his sound is never grating. Rather, his very parched textures add an almost magical sound to the vivid images that Raphael conjures up with his verse. Halley also channels the now celestial tenor beings of the past—more Coleman Hawkins than Ben Webster and Don Byas. But Halley also possesses a singular voice that sometimes rivals Sonny Rollins' haunting melodiousness ,and he can—and does—hold notes for what seem like an eternity, as he does on "& Now a Word From Your Atmosphere." In an inspired moment, Raphael and Halley's paths intersect with brazen majesty and incredible tension, but thepoet then breaks the tension with his inspirational phrase, "The heart knows too much jazz to stop growing fingers/a scalp full of reeds running in every direction/and into myself/dancing on my own skull..." As Raphael builds his image of a visceral mating of words and music, Halley relocates the powerful moment to the landscape of music, as he moves towards a quote from "Star Spangled Banner" for one of the album's most audacious moments.

These are, of course, only some of the unforgettable encounters between poet and musician. Most of them emerge with stealth the more the album is heard.

The First Car I See Tonight; Breath Test; Sudden Memory; & Now a Word From Your Atmosphere; Children of the Blue Super Market; The Cherry Tree at the Top of the Stairs; Bent; Kleenex and Ziplocs; NATO Report.