Labella: Child of the Soil

By SETON HAWKINS
December 16, 2005
Sign in to view read count 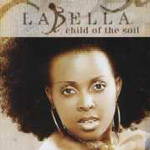 Labella is an artist in transition. Her debut album, Still Lonely, showed a singer with strong R&B and dance influences. However, for Child of the Soil, she has teamed up with guitarist/composer/producer Selaelo Selota—the album is for his label, C-Lota Records—in a move towards forging a more old-school Afropop/Safro jazz sound.

Selaelo's influence is constantly felt on this album—he composed and/or arranged nearly all of the tracks and plays guitar on some of the tunes. The trademarks of a Selaelo album are a smooth, old-school Afropop/Safro jazz sound, with a tight band comprised of some top-notch musicians. Selaelo is a master of subtlety and restraint; even when the band lets loose, it's still always controlled. This influence is particularly notable on "Dancing in the Rain, "Thamsanqa, and "Inkosi Yamakhosi. On these tracks, it appears the Selaelo is grooming Labella to be the next Judith Sephuma or Sibongile Khumalo.

However, on other tracks, Labella's roots assert themselves more strongly—"36 Weeks, "Apple of My Eye, and "My Dream are more reminiscent of her earlier album with their strong R&B leanings, while the vocal-acoustic guitar duet of "Africa sounds more like an india.arie album.

At times, these two styles seem to be in conflict with one another, and that is true to an extent. The album partially splits into the R&B category (the earlier part of the album), to the more Safro jazz sound (middle of the album).

However, where the album gets particularly interesting is when the two worlds sync up. "Onomathotholo, an otherwise traditional Xhosa song, gets a sonic update. Labella adds some vocal percussion noises, and the band stretches away from the groove that it had been laying down through much of the album. Labella also stretches her voice away from the warm, slightly smoky midrange she favors—adding growling and higher pitched cries a la Busi Mhlongo. The synth solo in the middle is unwelcome, but it's nevertheless nice to hear this sort of risk-taking in the music. In "Pitoria ka paesekele, Labella and band stretch even farther away from the norm, this time adding skittish wah-wah guitar and a fat, funky clavinet. The vocal chorus also features some impressive vocal acrobatics.

Ultimately these tracks are the most interesting. Here, there is a sense of risk-taking and an adventurous spirit that makes the album so notable. While the tracks leading up to these tunes are enjoyable R&B and/or Afropop pieces—and Labella's voice truly is a thing of beauty—the magic happens when the musicians stretch out of the well-trodden groove and into some truly new and interesting territory.

Note: this recording is available from One World on the web.