By CHRIS MAY
July 1, 2009
Sign in to view read count
Not to be confused with the Swedish trance and electronica label of the same name, the original Why Not label was an adventurous affair run by the Japanese businessman and jazz fan Masahiko Yuh for a brief but productive spell in the 1970s. With few contacts, but armed with an outstanding pair of ears, a cheque book and a heap of enthusiasm, Yuh travelled to the US in 1975 to record emergent or neglected musicians in Chicago, Philadelphia and Los Angeles. Why Not existed for a short while on the margins of the business before succumbing to economics, and for 30 years its modest but classy catalogue has languished with it. Of this first quartet of 2009 re-releases—from reed player Chico Freeman, co-operative trio Air, vibraphonist Walt Dickerson and pianist George Cables—only Air's Air Song, previously re-released on India Navigation, has been issued before on CD.

In 2008, the rights to the Why Not catalogue were acquired by the British label Candid, itself set up in 1989 to re-release historically important recordings made by the likes of bassist Charles Mingus and drummer Max Roach for critic and producer Nat Hentoff's Candid label (1960-61). Now much expanded and including early albums by such diverse artists as saxophonist Ingrid Laubrock and singer Jamie Cullum, Candid and the Why Not archive make for a harmonious match. 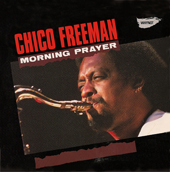 Son of the free-booting Chicago tenor saxophonist Von Freeman, reed player Chico Freeman shares both his father's immersion in the blues and his eagerness to experiment and push the boundaries. On this early outing as leader, recorded in Chicago in September 1975, the younger Freeman explores the radical traditionalism with which he'd make his name later in the decade and in the 1980s.

Morning Prayer is a rough hewn and rugged set on which Freeman is accompanied by like-minded players from Chicago's Association for the Advancement of Creative Musicians (AACM). The album has the feel of a live recording, including the occasional fluffed note, but the music is well captured (as it is on all Yuh's productions) and still packs a heck of a punch.

Freeman sticks to tenor saxophone on all but one track, on four medium fast to headlong tunes. Second horn player Henry Threadgill plays a mostly supportive role, stating the themes in close harmony with Freeman, but contributing a muscular baritone saxophone solo to "Conversations." The exception is the trippy "Morning Prayer," an extended flutes, tubular bells and hand drums piece which recalls the contemporaneous work of reed player Pharoah Sanders.

Shot through with the blues but edging towards less well signposted territory, Morning Prayer is a precociously substantial album whose rescue from obscurity is to be celebrated. 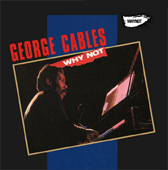 Masahiko Yuh's taste wasn't confined to AACM and the avant-garde, as this album by the more mainstream pianist George Cables demonstrates. As with Chico Freeman, Yuh here had the prescience to record an artist in the early stage of his career as a leader.

Cables went on to record a good quantity of own-name albums from the late 1970s. But when Yuh recorded him in Los Angeles in October 1975, he was making his living as a sideman, with tenor saxophonists Sonny Rollins and Joe Henderson and trumpeter Freddie Hubbard among others. A few months later he was featured on alto saxophonist Art Pepper's The Trip (Contemporary, 1976). Sometimes in the company of bassist Tony Dumas and drummer Carl Burnette, who complete the line-up on Why Not, Cables was Pepper's first choice pianist from the late 1970s until the saxophonist's death in 1982.

An exuberant, two handed, lyrical player with extensive knowledge of the American songbook, Cables here plays only his own compositions. All but the closing "Think Of Me" are upbeat and rhapsodic, with an undercurrent of funk in either Cables' left hand or Dumas' bass. Most of the titles, and some of the structures, suggest duality, but as with "Quiet Fire" there's a lot more in-the-moment heat to be heard than there is reflective introspection.

Yuh apparently liked the pretty funk of "Why Not" so much he named his label after it. And Art Pepper liked Cables' playing so much he called him Mr Beautiful. Good calls, both of them. 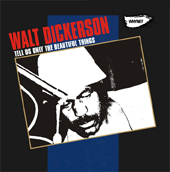 Unlike Freeman, vibraphonist Walt Dickerson, almost a generation older, was well established among the avant-garde when Yuh recorded him in this trio setting in Philadelphia in July 1975. He'd already been voted a New Star in the Downbeat critics' poll (back in 1962), and had worked extensively with keyboard auteur Sun Ra.

Dickerson generally played with two rubber mallets, treated (history does not relate precisely how) to produce a glowing, sumptuous sound. His emotional range was layered and complex, suggesting serenity with an undercurrent of turbulence, and was mellifluous, percussive and harmonically quirky. On Tell Us Only The Beautiful Things he was accompanied by bassist Wilbur Ware and drummer Andrew Cyrille. The latter, as might be expected, was a close fit, but so too was Ware. The bassist is still probably best known for his work with pianist Thelonious Monk in the 1950s, but in the early 1970s he played with Sun Ra and new-thing tenor saxophonist Archie Shepp. He brought an anchor steady, swinging foundation to the music, from which Dickerson and Cyrille were able to spin off and digress with confidence.

Dickerson (who died in 2008) had several lengthy drop outs from the scene during his career—outside Philadelphia he'd been off radar for several years when Yuh recorded him—and partly for this reason it is Bobby Hutcherson who is the vibraphonist most closely associated with the avant-garde of the 1960s and 1970s. Tell Us Only The Beautiful Things is a reminder of Dickerson's singular talent. 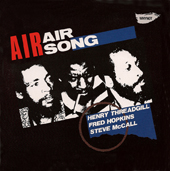 Air's music inhabits similar territory to that beginning to be explored by Freeman at the time, but with greater use of free rhythm and tonality. Only the opening "Untitled Song," a medium fast swinger with Threadgill on tenor saxophone, makes through-use of a fixed meter. "Great Body Of The Riddle Or Where Were The Dodge Boys When My Clay Started To Slide," with Threadgill on baritone, and "Dance Of The Beast," with Threadgill on alto, are free and frequently wild, with the three musicians bouncing off and around each other in a wholly unscripted manner. The closing "Air Song," with its meditative flutes and atmospheric percussion, is in a similar vein as the title track on Morning Prayer.

For all its innovative intent, Air never lost its connection with the mainstream jazz tradition, including its blues roots and the central importance of percussion, and this gives its music an enduring depth shared by no means all of the radicals active at the time alongside it. It is to be hoped that the re-release of Air Song will be followed by that of Afrisong, another key album from the group's first, pre-New Air purple period recorded by Yuh.

Tracks: Like The Kind Of Peace It Is; The In Between; Conversations; Morning Prayer; Pepe's Samba; Pepe's Samba (Long Version).

Tell Us Only The Beautiful Things

Tracks: The Nexus; Tell Us Only The Beautiful Things.

Tracks: Untitled Song; Great Body Of The Riddle Or Where Were The Dodge Boys When My Clay Started To Slide; Dance Of The Beast; Air Song.