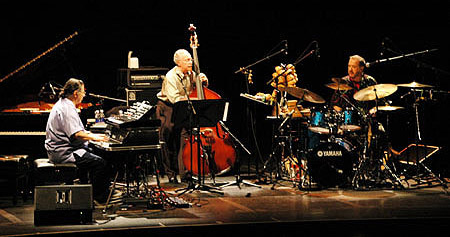 On entering the theatre of the Casino du Lac Leamy for pianist Chick Corea's eagerly anticipated show, the first surprise was that, along with the grand piano, there was both a Fender Rhodes and Moog synthesizer on stage. Clearly this wasn't going to be an all-acoustic show along the lines of the recently released Super Trio (Stretch/Universal Classics and Jazz Japan, 2006).

Of course, with legendary bassist Eddy Gomez in place of Christian McBride and, instead of Steve Gadd's conventional kit (but never conventional playing), Airto's blend of kit and hand percussion, a different kind of group dynamic was to be expected.

When the trio hit the stage it was immediately evident just how different the show was going to be. Walking on stage chatting as if they were walking into a living room, the overriding feeling was one of informality. And instead of the mainstream acoustic program that the three-quarter capacity crowd was expecting, what it got was a loose and conversational set where three friends dating back over thirty years would call songs on the fly and approach them with little, if any, preplanning or arrangement. Unpredictability was absolutely the defining characteristic, and if there were plenty of surprises for the audience, it looked as though there were plenty of unexpected moments on stage as Corea, Gomez and Airto played loose and free with material that ranged from standards by Richard Rogers, songs associated with pianist Bill Evans and a couple of Corea tunes from the classic Light as a Feather (Polydor, 1972).

Opening with a ten-minute free improvisation, each player defined their space in a context where there really was no clear leader. Certain comparisons could be drawn to Keith Jarrett's longstanding trio with bassist Gary Peacock and drummer Jack DeJohnette. But where Jarrett's stream-of-consciousness approach always feels so serious, Corea, Gomez and Airto were clearly out there to have fun. And while every one of them possesses formidable virtuosic skills that surfaced on occasion, there was a level of comfort as well, where there was nothing to prove and plenty to say. On the two Evans-related pieces—Scott LaFaro's "Gloria's Step and Evans' own "Waltz for Debby—what was especially evident was just how different Airto's sense of swing is. Avoiding the obvious, Airto instead used implication to suggest the lithe grooves, and gentle pushes rather than overstatement for exclamation. His incorporation of hand percussion into the mix gave the tunes—especially "Waltz for Debby—a completely different complexion.

Gomez's instantly recognizable tone— combining deep-in-the-gut low notes with brighter and busier explorations on the high end- -firmly supported his richly lyrical approach to soloing. Stretching the limits of the material's essence, he still managed to always retain reverence for its defining characteristics.

As accompanists, Airto and Gomez were so finely attuned to Corea's broad-reaching solos that there were times when it appeared that the three were playing arrangements, even though it was clear that they weren't. Corea is a master of taking things out harmonically but in ways that, instead of being jagged or jarring, manage to still speak to his audience. Even when the trio ventured into completely free territory there remained an inherent accessibility, an attention to never losing the audience in cerebral self-indulgence.

Like Corea's version of "Matrix on Super Trio, this trio's take on his classic "500 Miles High was, perhaps, most notable in the way that they gradually worked towards its familiar form. From the beginning it was clear that this was the song they were playing, but they took their time getting to it, with Corea often suggesting aspects of the tune without fully expressing them, so that when the trio finally coalesced into a more propulsive and cohesive rhythm it was met with wild applause. Similarly, during the second of two encores—"You're Everything, also from Light as a Feather—the trio took an ambling approach that placed the form in the center but surrounded it with playful invention, also featuring Airto's raw and evocative vocalizing.

Everything was extended, yet the hundred-minute set seemed to fly by in an instant. Whether they were reworking material by Richard Rogers ("With a Song in My Heart ) or Antonio Carlos Jobim ("Desafinado ), there seemed to be little if any game plan. For some, that kind of risk can result in valiant but failed experiments, but the simpatico between Corea, Gomez and Airto is so deep that there was little chance of that happening. Anything was possible, with the trio shifting rhythmic gears on a dime. Any one of them might suggest a change and there was complete confidence that not only would the others pick up on it and follow, but that it was just as likely that yet another variation might be suggested, moving the trio off in yet another direction.

Corea divided his time equally between acoustic piano and Rhodes, using the Moog rarely, but to great effect. During the extended vamp that ended "You're Everything Corea alternated between synth and Rhodes, in effect trading off with himself. Airto's combination of lithe kit work and hand percussion created terrific tension and release, beautifully shifting from textural hand percussion to delicate ride cymbal work that would open a tune up dramatically, but always with understatement in mind.


While taking the requisite bows at the end of the show, the trio ultimately left the stage the way they entered it—three close friends who'd just gotten together to casually make a little music—and, for a short time, providing the audience a glimpse into a more informal alternative to the kind of structured formatting so prevalent at most shows. The end result was—despite taking place in a 1,100 seat theatre—a rare sense of intimacy where the musicians' personalities were on equal display with their exceptional musical talents.