By PHILLIP WOOLEVER
November 24, 2009
Sign in to view read count
Corea, Clarke, and White
Tonhalle
Dusseldorf, Germany
November 4, 2009
An acoustic visit by these long journeying, top tier collaborators brought fresh perspective to their work, and thus to both the ups and downs of a widely touted gig. Happily, for the relatively small crowd, there were far more ups than downs.
While most reviews have been overwhelmingly positive, not everything has been roses for CCW since their guest and star-studded kickoff at the Hollywood Bowl. They have had amazing, widespread and busy recent schedules, including triumphant tours with the Return to Forever reunion, Five Peace Band, and SMV - Stanley, Marcus, Victor, and tonight's principals are only human. It isn't hard to imagine that once in a while things just don't click, especially when the hall echoes sparsely and the sound is a bit off. Lesser artists might have slunked into a low-key mode, but Corea, Clarke and White proved to be just about anything but lesser artists, as the determined joy on their faces proved. 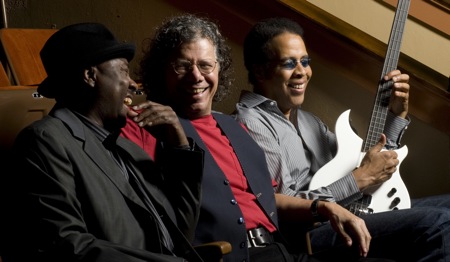 The show began with Corea setting the scales behind a subtle lead into "Sometime Ago-La Fiesta" from his album Return To Forever (ECM, 1972). The album featured Clarke, predating both musicians' subsequently christened supergroup of the same name. In this evening's format, the piece had a classic feel from the urban '50s, and as Clarke and White let their foundational rhythms bloom it would have been an exceptional opening, but sound problems blurred the piano and bass. White's slick cymbals sounded crystal clear from his first touch, but that brilliance ironically cast unforgiving illumination on the others' instruments.

The cavernous Tonhalle, (a former planetarium that is now home for the Dusseldorf Symphony), and the regular PA system were not a perfect match for Corea's percussive keys. On stage there were only two monitors and one amp, and the amp was an ongoing problem for Clarke. Tonight's unsung heroes were the unflappable sound crew of Bernie Kirsh and Travis Rogers, who righted the ship within minutes.

By the time Clarke pulled out his bow and the trio flowed into tomorrow with a stirring version of Bill Evans' "Waltz for Debby," Corea's intervals resounded appropriately and Clarke's majestic upright bass had proper prominence. Soon the sound from the minimalist set hit the ear just right, as if your head was positioned perfectly between the snare and the piano's wing.

As the first half wound down with Corea's "Bud Powell" and "No Mystery"—probably the show's absolute highlights—the concert achieved the rare level of the highest artistry. All the rest was gravy, icing, or perhaps here, along the Rhineland, bratwurst mustard.

After a brief intermission, they returned with subdued but sublime takes of "On Green Dolphin Street" and "Stella By Starlight," in which rotating solos had most of the audience moving in awestruck appreciation. Clarke's "La Cancion de Sophia" and RTF's "500 Miles High" added to what amounted to a "greatest hits" performance. For Corea to consistently lead the set's many shifts was a considerable feat in itself.

For much of the concert's second half it was primarily Clarke's show. He took the majority of extended solos and made a strong argument for himself being one of the top bassists of any era. With slapping, stroking hands, like an agitated army of octave spiders, Clarke demanded the most versatile sounds from four strings to be heard in quite a while. When Clarke launched into various moods and grooves, Corea leaned way back on his stool and smirked, while White closed his eyes and paced along with an amused "What's he up to now? " grin across his face.

Perhaps tonight's disappointing turn out of approximately 400 customers for major performers, in a venue that holds many more fans, was one of the marks of recent recession in this area, where the heralded Amsterdam Symphony cancelled their season due to lack of sponsorship. Whatever the case, even at around 50 euros a pop, everyone seemed to agree they got more than their money's worth.

The finale and double encore of "Someday My Prince Will Come" and "I Mean You" featured great closing breaks from all and sent everyone into the night on inspired paths. CCW took what could have remained a chilly Fall evening and set it aflame with passion. Hopefully, the artists got as much from this somewhat rough stop along the road as their audience did.

Corea and White graciously allowed Clarke to shine. They are a trio of rare chemistry. It was not a "return to forever," but Corea, Clarke and White proved that for them, talent and heart are constants anyway.