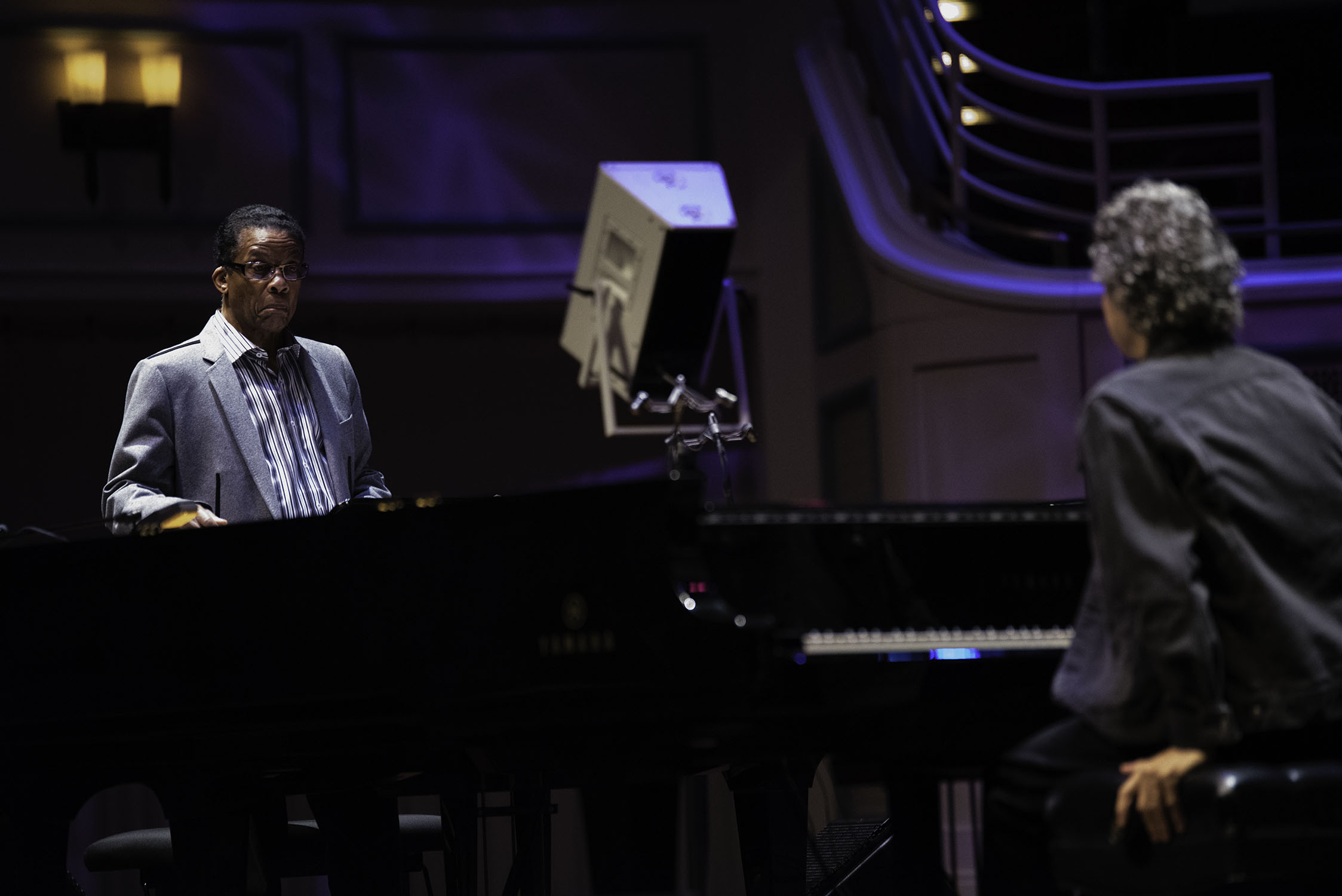 Chicago and Indianapolis hosted the final leg of Herbie Hancock and Chick Corea's North American tour. Really, it was a tour nobody wanted to see come to an end. Each show was unique and individual, with a surprise appearance in Indianapolis.

"You probably thought we had a set list planned," Hancock chuckled as he greeted the crowds.

"We're going to start out with nothing."

The two pianists took their seats, facing each other across two grand pianos. Hancock began building lush chords, while Corea came in high with butterfly flourishes. Together, they improvised a melancholy lullaby that set the tone for an evening of intimate spontaneity.

The pianists—who, in addition to their own solo careers, both cut their jazz teeth in ensembles led by legendary trumpeter Miles Davis—are touring together for the first time in nearly 40 years. Their 1978 tour, which produced two double live albums, was strictly an acoustic affair. Interestingly, both men were then deeply committed to fusion, playing spacey and rhythmic electrified jazz accented with rock instrumentation.

Apart from a few brief interludes on synthesizers that hinted at the music that earned them widespread crossover appeal, each evening was a conversation between two jazz masters and their grand pianos.

They played each other's best-known songs, such as Corea's "Lineage" and "Duplications," and Hancock's "Maiden Voyage," "Cantaloupe Island," "Watermelon Man" and "Dolphin Dance." Hancock, 75, was the dapper older gentleman in his blazer and collared shirt. Corea, 73, was casual in denim and some badass sneakers.

They were dynamic to watch: Corea silently phrasing out the music with his mouth, Hancock grinning while he played, both locking eyes when they moved into improvisations and taking cues from each other's faces as they effortlessly worked off one another's styles—Hancock's fundamental bluesiness and Corea's Latin-flavored classical sound—to create vibrant sonic tapestries. In one of the more playful moments, Hancock even improvised a hip-hop beat with his synth drum program while Corea created a crystalline melody on his own, before reaching into the top of his piano to pluck its strings. Between songs, they joked with an eclectic crowd as diverse as the pianists' respective catalogues, which range from avant-garde to fusion to pop.

Corea invited his wife, Gail, onstage to sing "Someday My Prince Will Come," which the Miles Davis Sextet recorded in 1961. Her range and otherworldly vocals brought the sold out crowd to its feet.

For an encore, the duo delved into Corea's 1970's fusion masterpiece, "Spain"—a song that followed Davis' Sketches of Spain (Columbia, 1960) by borrowing heavily from Spanish composer Joaquin Rodrigo's 1939 composition, "Concierto de Aranjuez." Corea turned the audience into a choir, dividing the hall into two male and three female parts to create a mesmerizing vocal chord to accent the evocative piece.

As their encore crescendoed, Corea and Hancock led the audience in a call-and-response, encouraging them to mimic their pianos' phrases, laughing when they tried to trip the crowd up. Such jovial intimacy characterized the nights: two masters still at the height of their musical prowesses; two old friends happy to be challenging each other onstage again.