As they took to the Barbican stage, they were announced as "Chick Corea and Gary Burton, Crystal Silence." This tour marks the thirty-fifth anniversary of Corea and Burton first playing together. (As Burton told the audience, "It was at an impromptu jam session at the end of a German festival. We were the only two who responded to the promoter's request! ) That encounter indicated to the pair that they were highly attuned as improvisers, and led to the offer to record together, an offer that led to Crystal Silence, released on ECM in November 1972. They have played together off and on— more off than on—ever since, always being able to pick up that special something, no matter how much time has elapsed. 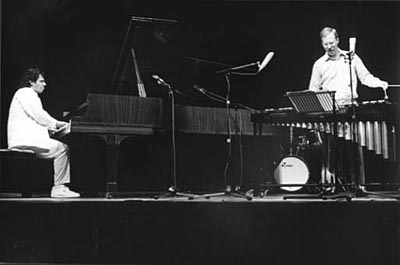 So, some audience members may have come expecting a full recreation of Crystal Silence, in the manner of many other live recreations of classic albums (from Pet Sounds and Forever Changes onwards... Indeed, across town, at Hammersmith Apollo, Lou Reed was recreating his Berlin album, of a very similar vintage to Crystal Silence). If that were the case, Corea and Burton had other ideas, providing far more than just that album. The program held few surprises for long time followers of the duo, but there were some.

They opened with "Love Castle and the title track from Native Sense (Stretch, 1997). With admirable comic timing, Corea introduced the opener as "a track from our latest album... recorded twelve years ago. These pieces set the pattern for the evening's music, a pattern that didn't vary greatly. Much of the time piano and vibes played a musical game of cat and mouse, intertwining their melodic lines and batting ideas back and forth. In typical fashion, Burton's four mallets were often just a blur as he used the full range of his instrument to conjure up melodies. The roles of lead and accompanist switched between the two with great frequency, but just as often such roles were totally meaningless as the pair soloed simultaneously, displaying their sympathetic anticipation of each other's ideas. Other familiar material included "Bud Powell —which provided the opportunity for a back-and-forth dialogue between piano and vibes - and "Mirror Mirror." 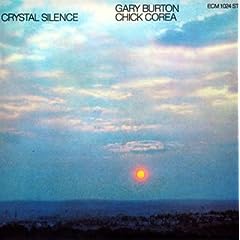 The surprises included a new flamenco-based composition from Corea, which began with both players beating out rhythmic patterns with their hands on the frame of the piano, plus Scriabin's Prelude #4 ("unfinished, but we're going to finish it tonight ) and a Monkish version of "Sweet and Lovely," which allowed Corea to show that he learned as much from Monk as from Bud Powell.

By the time "Crystal Silence was played, midway through the second half, the atmosphere in the Barbican was decidedly laid back, the soothing effect of over an hour of piano and vibes. The piece was greeted with the most prolonged applause of the evening. As the up-tempo "Senor Mouse and more from the album came, enthusiasm levels continued to rise. At the end, the twosome were given a long ovation and called back for two encores, on the second of which Corea and Burton dueted with both on the vibes.

Back in 1972, Burton questioned whether people would want to hear "a whole hour of just piano and vibes. His skepticism was fitting—and shared by many fans of trumpets and saxophones—but subsequent history has shown that there are plenty of people who do. This evening again proved the point.