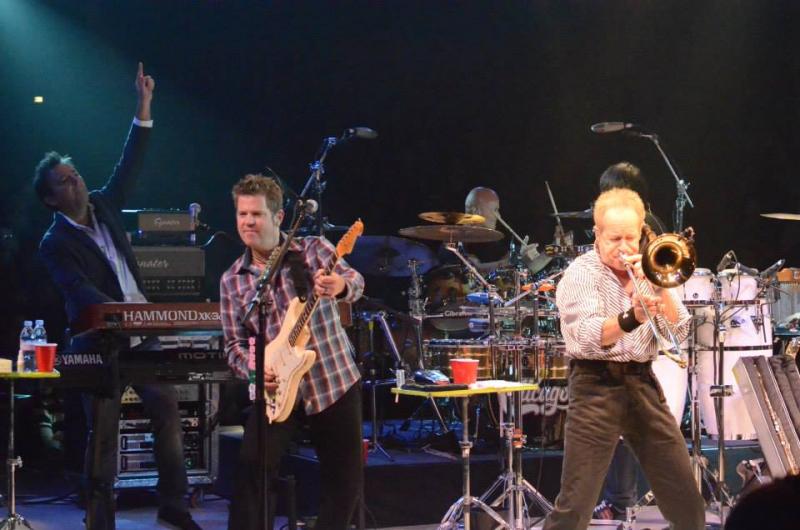 During the initial phase of its career, Chicago was considered the preeminent Jazz-rock fusion outfit, its musical mix considered quite revolutionary for its time. By the late 1970s, its music had become iconic. Tragedy struck, however, with the death of guitarist Terry Kath in 1978. Though it took a little while for the band to again find its way, in the 1980s Chicago cemented its place among platinum recording outfits by slightly altering its sound and focusing more on ballads. Over the years, the band has continued to release new material and tour while maintaining a core of original members along with longtime alumni and the occasional new face. Chicago remains one of the most diverse and successful bands of the rock era.

Starting promptly at 8PM, the nine-piece band whose career has spanned decades (formed in Chicago, IL in 1967, releasing its first debut, Chicago Transit Authority (Columbia) in 1968) thrilled its fans in this intimate Long Island venue with a career-spanning two-set performance. Shortly after the opening numbers, co-founding trumpeter/singer/songwriter Lee Loughnane announced that the crowd should feel free to take as many pictures as it liked, much to the delight of the sold-out audience.

The small venue, a standard annual tour stop for Chicago, is a theater in the round featuring a slowly rotating stage that makes every seat an excellent vantage point. The band featured Loughnane and three other original members—keyboardist/guitarist/vocalist Robert Lamm, saxophonist/flautist Walter Parazaider and trombonist/songwriter/singer Jimmy Pankow—as well as bassist/singer Jason Scheff, drummer Tris Imboden, guitarist Keith Howland, keyboardist/vocalist Lou Pardini and percussionist Walfredo Reyes Jr., and treated the crowd to an evening of exactly what they came for—a show loaded with classic hits beginning with "Questions 67 & 68," "Dialogue (Parts 1 and 2)" "Alive Again," and "(I've Been) Searchin' So Long."

Scheff then came center stage and commandeered the keyboard for an acoustic version of "Will You Still Love Me?" This was the first of three acoustic love songs, followed by Robert Lamm's "Another Rainy Day In New York City" and "Look Away," which featured Paradini. The show's first half then wrapped up with "Ballet for A Girl in Buchannon."

After a short intermission, the band wowed the crowd with a killer version of "Old Days." The second set was dominated by signature classics such as "Street Player," "Beginnings," "Just You 'N' Me" and "Saturday In The Park." Additionally the second set was highlighted by a ferocious call-and-response drum solo from Imboden and Reyes during "I'm A Man."

The band, led by ringleader Pankow, spent the entire evening smiling while playing, pointing to old friends in the crowd and generally mugging for the many cameras that took pictures through the performance. Each member possessed and demonstrated an energy that fed off of their band mates; it was so contagious that the liveliness and vigor among the audience members appeared to grow with each song and every passing moment. The evening ended on a high note with "Feelin' Stronger Every Day," from Chicago VI (Columbia, 1973). The encores—"Free," from 1971's Chicago III (Columbia) and the Lamm-penned "25 or 6 to 4," from Chicago II (Columbia, 1970), worked the mostly older crowd into even more of a frenzy.

Even now, almost fifty years removed from its first release, Chicago's music continues to excite and (thankfully) thrill audiences. Without showing any signs of slowing down, Chicago remains a vital and strong musical force.