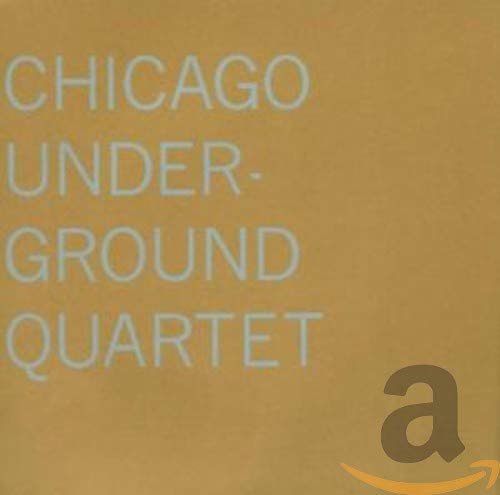 They've been a duo, they've been a trio, and they've been an orchestra—so why stop there? As the Chicago Underground Quartet has evolved, it's expanded cornetist Rob Mazurek's very democratic vision. On its eponymous debut, the CUQ covers a broad range of styles from percolating polyrhythm (as on the opener, "Tunnel Chrome"), to gentle lyricism ("Three in the Morning"), to spacious improv ("Sink, Charge, Fixture"), to all-out energy music ("Welcome")... with lots of stops in between. The most exciting moments on Chicago Underground Quartet lie at the intersection between different musical territories, which the group self-confidently treats as a fluid continuum.

While the CUQ comes across as a group effort, it's just as importantly a collection of individuals with distinct musical personalities. Mazurek's cornet playing sees him through many changes: equally at home singing pure melody or exploring the full tonal range of his instrument, he searches out the notes and the colors that work in different circumstances. Rather than brashly exercising pure virtuosity or sticking defiantly to the melody, he explores the middle ground. Jeff Parker, who joined the Trio as a guest on Possible Cube, contributes a sense of stability to the group. He's a listener as much as he is a player, and that reflects itself in his inclination to fill gaps.

Percussionist Chad Taylor handles the drums as well as the vibes. He does a great job in the drum chair, but his most interesting playing happens when he takes mallets in hand—combining counterpoint and melody with a keen sense of rhythm, and adding welcome color. The fourth member of the quartet, bassist Noel Kupersmith, often plays a structural supporting role. During periods of regular progression, he provides the group an electric ground. But when the music flies free, he takes a more harmolodic approach to his instrument, laying down twisting, thrusting lines that intertwine with the other instruments.

The general tone of Chicago Underground Quartet is reflective and deliberate, though regular moments of exuberance and open-ended play appear interspersed throughout. Each tune on this record (a collection of originals by each member of the group) is a composition in the formal sense. Themes and moods receive detailed attention before the quartet moves on. But the disc is constructed in a coherent way so that it acquires body and spirit as a whole. The sudden Ornette-ish fanfare at the end of the closer, "Nostalgia," openly promises another chapter in this evolving story.