By GERMEIN LINARES
October 27, 2005
Sign in to view read count 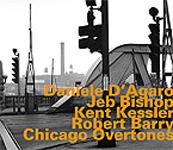 The Windy City is currently cultivating new sounds in jazz. Sure, sure, it's always been a strong hub for the music, but recent offerings out of Chicago have elevated the city's jazz status beyond New York-like coolness. Not only does Ken Vandermark reside there, but in recent memory there have been several worthwhile releases from Chicago-based artists.

All the while, though, the group's core remains accessible, allowing appreciation of its unique techniques. Enjoyable and daring, the music on Chicago Overtones invigorates. Stimulating the mind as well as striking that snappy cadence known as swing, the album enjoys straddling the in/out borders of jazz. Neither all the way there nor too close here, this recording delights in its sinuous motions, its comings and goings, its flights from Italy to Chicago—and it all seems well worth the effort.