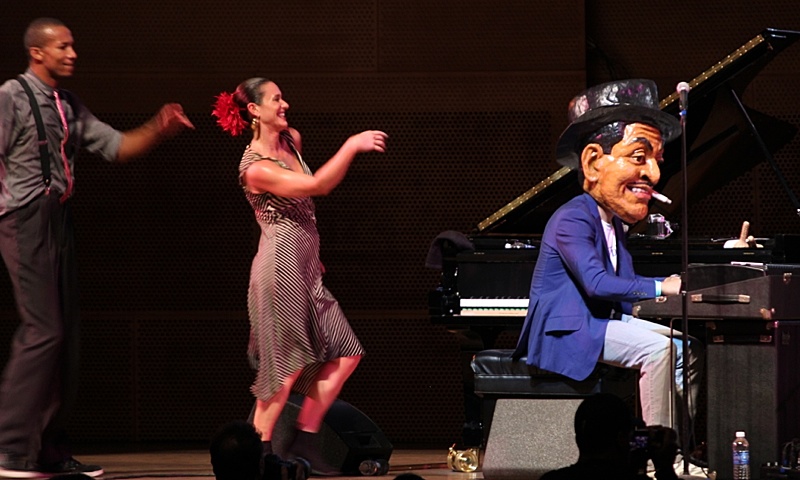 You get the feeling it is a jazz city when, waiting in line at the airport, you overhear a conversation about Anthony Braxton's first meeting with Derek Bailey. Then, your suspicions are confirmed in the taxi, on the drive to the 2013 Chicago Jazz Festival when the cabbie engages you in a discussion of the major works of Eddie Harris and Gene Ammons. From Louis Armstrong's travels up the Mississippi to take up residence here, to soul jazz and the AACM, this city breathes jazz.

The festival, held over Labor Day weekend, began on Thursday evening with drummer Jack DeJohnette's Special Edition Chicago. Now in it's 35th year, it has moved into the Jay Pritzker Pavilion in Millennium Park. The Frank Gehry design, an explosion of stainless steel in Grant Park, is a star itself with seating for the attentive fan and an expansive lawn to picnic on. The festival organizers set up a north and south pavilion (the south dedicated to saxophonist Von Freeman who passed away in 2012), and a space on the top of the Harris Theatre for high school and college ensembles to perform.

Besides the dedicated venues, jazz bled from various locales and clubs, giving the listener a joyous musical overload. Thursday, pianist Randy Weston performed a solo set upstairs in the Cultural Center while the retro-band Fat Babies played music from the 1920s and 1930s downstairs. Just like the 2012 edition with Ken Vandermark playing a duo with Joe McPhee, the intimate opening at Roosevelt University's Ganz Hall threatened to be the highlight of the weekend. The festival's artist-in-residence Hamid Drake presented his Chicago Trio with Ernest Dawkins and Harrison Bankhead. The packed hall was reminded of the huge shadow cast by Fred Anderson who, like Drake, was born in Monroe, Louisiana.

Then it was on to the Pritzker Pavilion and DeJohnette's supergroup with Muhal Richard Abrams (piano), Larry Gray (bass), and the twin saxophonists Roscoe Mitchell, and Henry Threadgill. While the music sputtered in fits-and-starts at times while getting off the ground, Mitchell bulldozed through with a compelling solo on his composition "Chant" that pleasingly swallowed the entire bandstand. 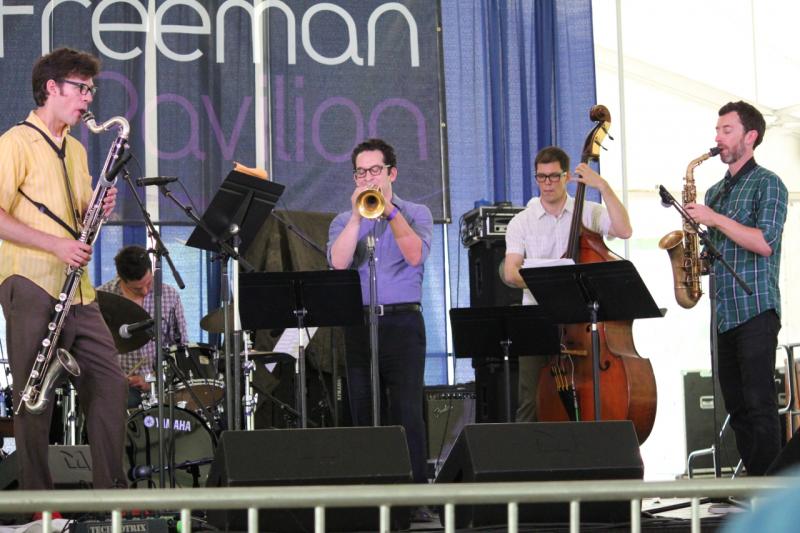 Later the same evening, Bay area saxophonist Aram Shelton presented his Chicago quartet at the Elastic Arts Foundation with Keefe Jackson (tenor saxophone), Anton Hatwich (bass), and Tim Daisy (drums), supplemented by guests Frank Rosaly (drums), Josh Berman (trumpet) and Fred Lonberg-Holm (cello). The quartet became a version of the Chicago Fast Citizens concept where the leadership is passed around to various members of the band. This band would be heard at the festival on Sunday, under the leadership of Lonberg-Holm. The music transitioned from composed to improvised with an ease not heard in the DeJohnette set, maybe due to a lack of ego from these young musicians that allows such graceful indulgence. These upstarts leave no doubt that the torch is being passed to a new generation.

Friday brought drummers Michael Zerang and Hamid Drake into the world of traditional Japanese drum music, performing with Eigen Aoki (son of the bassist Tatsu) and the Tsukasa Taiko drummers. Their energy did nothing to dissipate the heat with temperature's hovering over 90 outside the pavilion and certainly near 100 inside. Drake's travels in and knowledge of world music seemed infinite and he brought an exuberance to every situation, while the Taiko drummers fired up the crowd, sending them in search of new sounds.

Next up was last year's Pulitzer Prize finalist Wadada Leo Smith playing selections of his Ten Freedom Summers (Cuneiform, 2012). The music detailing the Civil Right struggles in America, beginning with Emmett Till and concluding with the 9/11 attacks, was presented by Smith's Golden Quartet of Anthony Davis (piano), John Lindberg (bass), and Pheeroan AkLaff (drums) and the Pacifica Red Coral string quartet. Presented without announcements, the audience was cued by the video artist Jesse Gilbert's images projected on the large Pritzker screen. Smith's dramatic and stirring sounds deserve to be presented over multiple nights and with detailed program notes, but for a festival with an estimated budget of only $200,000, the one hour of music was a godsend. 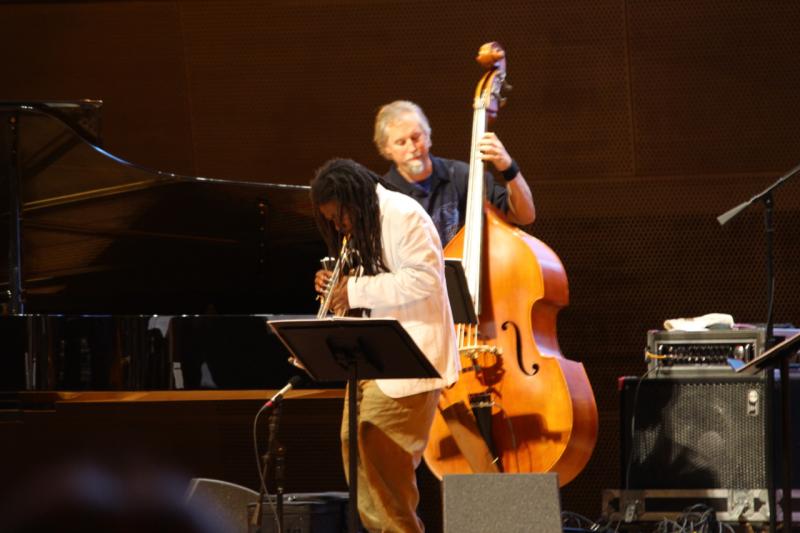 Friday night was capped off by saxophonist Charles Lloyd's acclaimed quartet of Jason Moran (piano), Reuben Rogers (bass), and Eric Harland (drums) with guest guitarist Bill Frisell. The 75 year old saxophonist strolled out playing "Let My People Go." The band parted the musical waters for Lloyd, whose tone is as strong and enduring as ever. Frisell was satisfied to accompany him all night, and the Moran and Harland combination could barely be contained.

Saturday morning found firebrand Chicago saxophonist Nick Mazzarella incinerating the north pavilion with his updated version of Ornette Coleman-meets-Jackie McLean post bop. His music could only be contained by way of bassist Anton Hatwich and the muscular drumming of Frank Rosaly. The Mazzarella Trio performed music like an angry punk rock band, if the punk rock band were also young masters of their instruments.

Next up was a curious quartet of Hamid Drake, Kidd Jordan (saxophone), William Parker (bass), and Cooper-Moore, who doubled on the piano and his creation, the electric mouth bow. The spontaneously composed music surged and occasionally collected itself, each master adding ingredients. Jordan referenced John Coltrane, Cooper-Moore the energy of Cecil Taylor, while Parker and Drake maintained the spark. They were followed by Satoko Fujii's Orchestra Chicago performing a lengthy piece she wrote for the festival. Her Midwest group is just one of five big bands she juggles along with her Quartet Kaze, a trio, and multiple duos. The sound was big, muscular, and fitting for this city. Let's hope she records with this lineup soon.

Nighttime performances found Rudresh Mahanthappa's Gamak (ACT, 2013) bursting out with his version of prog-rock jazz played with a post-M-BASE sound. Mahanthappa's incorporation of the intricacies of Indian music with jazz is completed with the musical rantings of guitarist David Fiuczynski, bassist Francois Moutin, and drummer Dan Weiss.

Then there was the Fats Waller Dance Party, an updated (can you say hip-hop) version of music from the 1920s and 30s. Jason Moran has pushed modern jazz way ahead of the curve. His cover of "Jitterbug Waltz" referenced none of Eric Dolphy's accent, sampling (like a DJ) pieces and parts of the original. The show included dancers—four of them professional, and many selected from the audience. When the band struck up "This Joint Is Jumpin,'" they certainly weren't kidding. 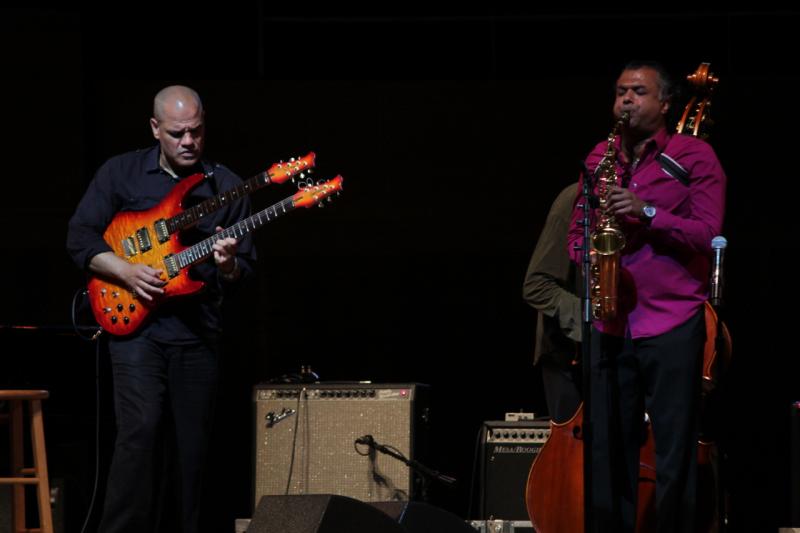 The final day stretched the elastic elements of jazz. The Scandinavian band Atomic with Fredrik Ljungvkist (reeds), Håvard Wiik (piano), Magnus Broo (trumpet), and superstar rhythm section of Ingebright Håker Flaten and Paal Nilssen-Love (drums) navigated an ocean of sound that cued off both European and American concepts of jazz. At times their music threatened to explode on the bandstand, but incredibly they maintained a close interplay and tight energy.

Saxophonist Dave Rempis brought his band the Engines with Tim Daisy (drums), Jeb Bishop (trombone), and Nate McBride (bass) to the north pavilion, playing a brand of tight compositions that unfurled into intense passages and tricky improvisations. Rempis, who apprenticed in the Vandermark 5, is a solid leader with multiple projects and a great jazz vision.

The highlight of the final night at the Pritzker , was Hamid Drake's Bindu playing Reggaeology (Rogue Art, 2010). His band of trombonists Jeff Albert and Jeb Bishop, Jeff Parker (guitar), Josh Abrams (bass) and beatbox singer Napoleon Maddox from Iswhat?! was augmented by Chicago vibraphonist Jason Adasiewicz. Drake's music unites listeners. Here, he mixed the popular music of Reggae with the improvisation of jazz. Fans who like jazz, but don't care for ska and rocksteady, were drawn into its pulse, while the jazz-uninitiated couldn't help but identify with the flights of improvisation from the familiar.

All this music in just one weekend, and oh yes, the sounds described about were just the tip of the Chicago iceberg.