By HRAYR ATTARIAN
December 24, 2015
Sign in to view read count 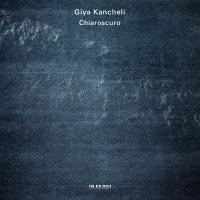 Introspective Georgian composer Giya Kancheli turned 80 years old in on August 10, 2015. As a birthday commemoration ECM has released two of his most intimate works on the deeply mystical Chiaroscuro. In addition to the title track the album includes the musing "Twilight" for two violins and orchestra.

Inspired by Kancheli's brush with a serious illness, "Twilight" is a cinematic meditation on mortality that encompasses a moving, emotional continuum. It opens with the two violinists Patricia Kopatchinskaja and Gidon Kremer overlapping pensive phrases with elegiac lyricism. Kremer and Kopatchinskaja's uniquely complementary styles give the piece a stirring vibrancy. Kremer's silky, lithe undulations contrast delightfully with Kopatchinskaja's resonant, hypnotic chords. A wistful, tense ambience prevails as Kopatchinskaja and Kremer engage in an expressive dialogue over pianist Indré Baikštyté's tolling keys. Occasional angry orchestral bursts punctuate the solemn, tuneful melody. Gradually, a devotional almost liturgical tone permeates the performance that then transforms into a pastoral spirituality. Collective sonic swells peppered with haunting silent pauses imbue the atmosphere with mournful angst. The wail of the principle violins gradually fades resulting in an angelic serenity and an otherworldly peace as the music concludes with the sweet chime of piano notes.

ADVERTISEMENT
The first composition written for a single violin and chamber orchestra is provocative in its alternating bold harmonic colors and subtle, reserved hues. Kremer, never an extrovert, is perfectly suited for this interpretation as he both solos and conducts Kremerata Baltica (that he founded) through the fine nuances of the piece. Exquisite and nocturnesque romanticism follow the thundering furiously bowed strings. Kremer's agile bowing meanders over the expectant, dissonant group sounds. His warm, forlorn monologue brims with near eastern motifs as the ensemble creates an intimate and nostalgic mood around him.

This captivating record is as deeply passionate as it is profoundly cerebral. Kremer and his orchestra, alone and with Kopatchinskaja, superbly crystallize the essence of Kancheli's most intimate and mature opus. Although dramatic elements of his earlier works remain it is the magnificent nostalgic asceticism of this pair of concertos that mesmerizes and stimulates. 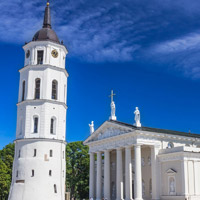