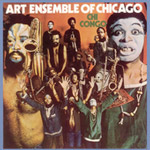 The reissue of Chi-Congo fills a very big hole in the active Art Ensemble discography. Since the mid-1970 recording, these sessions have seen light on at least five other labels in different formats. Released between Certain Blacks and Live on Affinity, Chi-Congo introduces Famoudou Don Moye as the group's permanent percussionist. "We moved towards the direction of developing as percussionists before we took on another drummer, Roscoe Mitchell said recently in an AAJ interview with Fred Jung.

The title track celebrates percussion as the band joins the new guy for a rhythm workout. Two percolating marimbas add melodic color, then a softly played flute signals Favors to lead on slippery bass. The late bassist burns through the band's dreamy soundscapes, then continues burning on "Enlorfe, Pt. 1, an AEC rave-up. After some blinding a capella playing from Favors, the others rouse and shine, beginning with a loquacious Bowie telling stories over Moye's metallic hailstorm. Various saxophones make comments, but Bowie and Moye explode.

The track fades and returns with "Enlorfe, Pt. 2, which must have been where side A of the original LP ended. Bowie finishes his thoughts and passes the baton to a short alto blast, followed by a short soprano run, and it's back to Bowie. Marimbas also come and go. Bowie's mute brings down the intensity in a duo with a bowing Favors. A flute and whispering cymbals replace Bowie, who returns for a dramatic coda which melts into the somber opening of "Hippatripp. The grays turn bright like a sunrise as the Ensemble engages. After some gleeful bicycle horn toots, Mitchell and Jarman wail on altos, soon joined by Bowie blaring.

A classic recording by anyone's estimation, from the past comes a reminder from the Art Ensemble, of virtuosic improvisation's power to communicate joy.