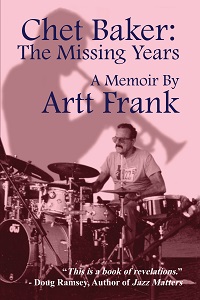 Baker attracts positive and negative criticism like a celebrity black hole—the artist as hero and antihero. When considering Baker, you consider no one else. From "On The Banks of the Jabbok with Chet Baker," All About Jazz, 2012.

Since his death in 1988, trumpeter/vocalist Chet Baker has been the subject of three biographies that when taken together, provide a temporal account of the musician's often turbulent life. The biographies must be considered together because each possesses a different goal in telling Baker's story. Jeroen de Valk, in his 2000 account, Chet Baker: His Life and Music (Berkeley Hills Books), focuses almost exclusively on Baker's music, providing an impressive, if necessarily incomplete, discography, with each recording rated one- to- five stars. As a resource on what Baker to listen to, it is excellent.

Author James Gavin's Deep In A Dream: The Long Night of Chet Baker (Knopf, 2002) rather than addressing Baker's art (though the book does contain a discography and an accompanying compact disc representative of Baker's early work), focuses on Baker's life and behavior as a testament to burden of celebrity and its cost for the unprepared. It is a dire story criticized for being hateful to Baker's memory. Gavin's approach casts Baker in the landscape of the dark heart of the American Romantic Dream, the same dream housing the myths of John Henry, "Doc" Holiday, Edgar Allen Poe and Charles Foster Kane. It is not a pretty story.

The most recent and well-balanced of the biographies is Matthew Ruddick's superb Funny Valentine: The Story of Chet Baker (Melrose Books, 2012). Ruddick, writing in Funny Valentine, cites three elements missing from previous Baker biographies: first, identification of the "human" element, that Baker was more than his addiction; second, an appreciation for Baker's music (Ruddick also provides a well-considered discography with ratings); and third, Baker's "stay[ing] true to his principles from a musical perspective, no matter what misfortunes he suffered in his personal life." Indeed, Baker has been viewed, largely in the American press, as a cultural artifact almost completely separated from his music, which is less than fair.

Baker has also been viewed too often from a new millennium perspective (looking backward through a prism of "reality television") rather than as a product of his time. With advances in understanding the chemical dependency disease concept and its treatment, allowing that Baker never had the opportunity for progressive or truly effective treatment, it is time that the obvious be acknowledged and the revealing light of biography focused in a different direction. Baker deserves an account of his more personal aspects sans the voyeurism of schadenfreude clotting our American "reality" psyche.

That said, James Gavin in Deep in a Dream further sharpened the contrast between Baker supporters and opponents with two quotes, the first from Italian pianist and Baker accompanist Enrico Pieranunzi:

"For American people, Chet was just a drug addict... [In Italy] we felt he was a great artist with a great problem. He was a man who needed help. He found a lot of friends here who felt his fragility, his shyness, his inner drama. He was so sweet when he played, so mysterious. Somehow he was able to express the question mark of life with so few notes. In Italy, we're more sentimental, and we felt that very much."

"It was a case of worshiping the self-destructive artist who dies young in a garret full of unpublished music or unsold paintings or something... It's a Christ-like image of self- immolation. That's something you encounter a great deal. You don't find it a lot in America."

What the complete biographical picture of Baker has been lacking is a personal recollection of the artist, one detailed from ground level, close up and in real time. Until now, Baker's life has been viewed from 30,000 feet in panoramic fashion where day-to-day detail is lost in the biographic minutiae of dates, people and places. This deficiency is at least partially addressed in the first volume of drummer and actor Artt Frank's memoir, Chet Baker: The Missing Years.

Frank, an aspiring bebop drummer, then in the armed services, first encountered Baker through the trumpeter's early recordings on Armed Forces Radio in 1952 or '53. He was completely taken with Baker's purity of sound and innate understanding of swing. Frank first made Baker's acquaintance in- person in 1954 while Baker was appearing at the Boston jazz club Storyville and Frank was living a couple of hours away in Maine. Frank drove from his home in Westbrook to see Baker perform. The two men met and made plans to perform together, a plan that never occurred. The two men went their separate ways only to meet again several years later, while both were living in the Los Angeles, Frank in Culver City and Baker in Redondo Beach.

Frank's memoir is delivered as a conversational narrative more intent on telling a story than weighing down that story with academic and biographic minutiae. I have filled in the dates of certain events for perspective and clarity. The first of these dates was a Monday, July 25, 1966 when, while Baker was performing at the Trident Club in Sausalito, was assaulted by a group of men, sustaining damage to his teeth and face, affecting his ability to play. It was about a year later, in late June or early July 1967 that Frank happened to pass the Los Angeles jazz club Donte's (a favorite of Art Pepper's) and saw that Baker was appearing. Frank went to the club, reintroduced himself, finding Baker in desperate straits. Baker was just being let go by the club because of a lack of business. Flummoxed, Frank began his sojourn, the center of this story, to help Baker that in the present volume would last until late summer 1971.

The central plot of the remainder of the memoir is a detail of Baker's and Frank's intersecting lives during 1967 and early 1968, when Frank was able to secure Baker a three night ride at West Hollywood's Melody Room, located on Sunset Boulevard across Sunset from the Whiskey A Go Go. Historically, the Melody Room would later be transformed into the famous Viper Room on whose front sidewalk a 23-year old, polyintoxicated River Phoenix would expire October 31, 1993. In the period between their initial re- meeting at Donte's and their appearance at the Melody Room is detailed by Frank, a period consisting of Baker and Frank painting houses, Baker practicing and rehabilitating his chops as well as warding off opiate withdrawal with all of the attendant events accompanying such a life.

While Frank does not sugar-coat Baker's chemical dependency, he does couch his reaction to it with an innocence that could never have been allowed today with "reality" programming like Celebrity Rehab, Addicted and Intervention captivating a dedicated viewership with the television equivalent of Romans at the Coliseum. This is defensible as the only archetypes of Heroin addiction in 1967 were those of Charlie Parker, Art Pepper and Baker. The public's awareness of and about, and reaction to, heroin addictions was being formed at this time and Frank captures this reaction perfectly.

Frank relates the incidences where he drove Baker into Watts to purchase drugs, and incidents where Baker's addiction forced him to pawn his horn or commit and be arrested for prescription fraud. In all such situations, Frank behaved as selflessly and non- judgmentally as Enrico Pieranunzi described the Italian attitude toward Baker's chemical dependency to James Gavin in Deep In A Dream and Frank related these events as such. In this memoir, Baker could have had no better friend, echoing his earlier relationship with Jacques Pelzer.

Frank's most effective writing surrounds Baker's and his appearance at the Melody Room. Frank had approached many clubs on Baker's behalf, trying to generate interest in Baker. The majority reaction was one of caution, as Baker's reputation was well known. Finally, Frank's persistence paid off and the owner of the Melody Room offered a three day run to Baker to take place shortly after the 1967 holidays. From Frank's account, Baker's dénouement was to take place over a weekend beginning on Friday, February 7, 1968. Frank describes the week leading up to the shows in near odyssean terms.

In the week before the show, Frank discovered that Baker had pawned his horn, something he had done previously with Frank paying to get it back. The show days away, Baker said he would get a horn from trumpeter Herb Alpert, a friend and supporter. The day of the show, Frank arrives at Baker's Redondo Beach home only to find Carol anxious because Baker had gone out for sundries and had not yet returned. Frantic at the prospects of Baker not showing, Frank drove to a bakery where Baker was known to go and found him nodding on sacks of flour covered in its white powder.

Frank collected Baker and made for the Melody Room unsure if Baker would be able to perform. After a short conversation, the two entered the club and began the show. According to Frank, Baker played well. Frank recorded the opening night, a fact echoed by Baker's wife Carol, in the introduction to the chapter on the appearance, taken from her own publication, Chet's Choice. She mentioned that the show had been taped and would be made available on her CCB Label. Unfortunately, this never happened.

Frank's description of this run of shows was exciting. While Baker had many "comebacks" during his career, Frank's description made this one special for its close proximity and intimate detail. When appearing the second night, critic Leonard Feather and his wife were present. Frank spoke with him and Feather requests that Baker play Tadd Dameron's ballad "If You Could See Me Now." When Baker called for the tune the true intimacy of this account was revealed in Baker's demonstration of the tempo to Frank:

"Chet turned around, looked over his shoulder and briefly acknowledged Leonard and his wife, then turned, looked at me and cupped his right hand and whispered, 'Watch my hand.' He then leaned his body to his right and lowered his right hand down as close as he could get it to the floor, and commenced to open and close his hand in a slow continual movement, signifying that this was how fast he wanted the time to fall on the downbeat of my Hi Hat..." (This passage captures the organic beauty of jazz: the opening and closing of a hand.)

These performances led to an extension at the Melody Room and ultimately to the recording (Blood, Chet & Tears (MGM/ Verve, 1970)). The memoir closes with Baker and his family moving to northern California with Baker's mother.